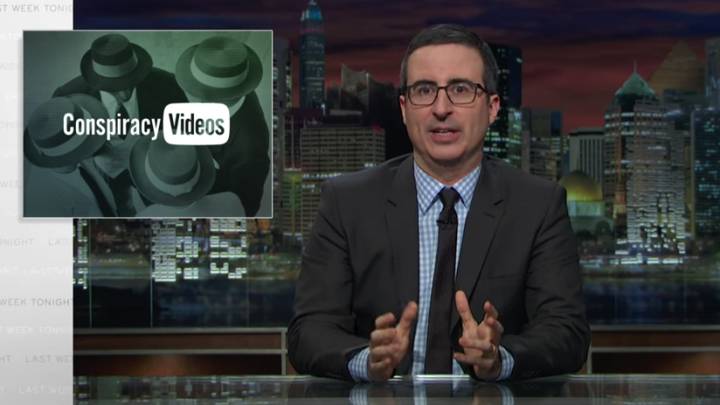 Conspiracy theories are abound online, where people try to tell their versions of far-fetched truths. There are conspiracy theories about everything you can imagine: JFK’s assassination, the moon landings, the events surrounding 9/11, the Illuminati, or even Katy Perry’s true identity. And there are plenty of YouTube videos that might have you convinced the world you live in is actually a lie.

Last Week Tonight’s host John Oliver is no stranger to conspiracy theories. Given that the top HBO show was on holiday during the Easter weekend, Oliver shot a brief segment on such theories, telling us about a conspiracy he fancies: The Cadbury cream eggs that “no one had the guts to explain.”

According to Oliver, conspiracy theory videos represent one of YouTube’s most entertaining segments, or “science fiction for people who don’t understand they’re watching science fiction.”

Oliver fans who are familiar with his imaginative ways of explaining serious matters with the help of humor are in for another treat from the host. Oliver is very passionate about his conspiracy theory and does very well explaining it, proving plenty of evidence to support his claims. After all, he has the perfect recipe for it.

“Any great Internet conspiracy video needs two key things,” he said. “One, a wild claim that something we take for granted is actually the responsibility of robots, aliens or U.S. presidents who are also robots or aliens. And two, you need an eye for incredibly specific detail and an ability to make wild accusations with complete confidence.”

Check out the video below to see whether there’s a link between Cadbury eggs and the Illuminati.