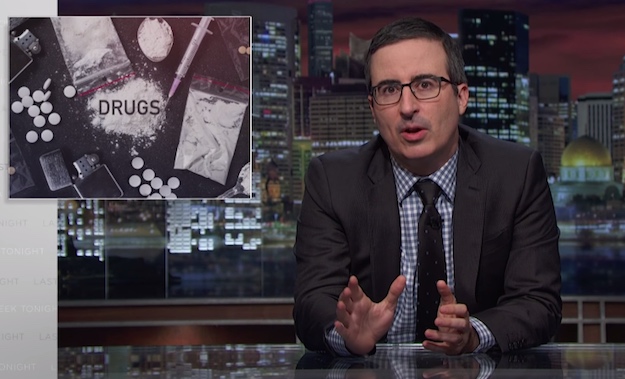 One of the reasons why HBO’s Last Week Tonight is so compelling is because it has a unique knack for taking a topic that most people don’t know much about and subsequently doing a great job of informing while also keeping the laughs coming.

During the most recent episode of Last Week Tonight, John Oliver and his writers set their sights on America’s opioid problem. From heroin overdoses to an increase in prescription pain killer related deaths, America’s ongoing struggle with opioids is a serious topic that doesn’t typically attract the level of attention it deserves. Thankfully, Oliver was in top form this weekend as he provided viewers with no shortage of interesting data about this growing epidemic.

“As of 2015,” Oliver said towards the beginning of the segment, “an estimated 2.6 million Americans were addicted to [opioids] and they’re now involved in almost 30,000 overdose deaths a year in the U.S.” Another interesting data point tis that approximately 75% of all heroin users started off with prescription painkillers like OcyContin and Vicodin.

Getting to one of the root causes of the problem, Oliver explains:

And look, a nuanced discussion between the medical community about the complexities of pain treatment is clearly important. The problem is that discussion became dominated by the pharmaceutical industry who started amplifying the message that opioids should not just be used for acute pain like that from cancer or surgery, but for all sorts of pain like arthritis and backaches. Which makes sense as a motive coming from the pharma industry.

The full video is embedded below, and per usual, it’s as educational as it is laugh out loud funny.