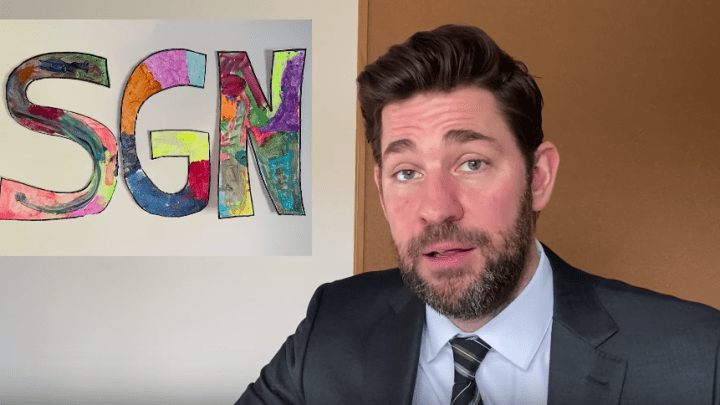 John Krasinski was trending late last night on Twitter, prompting many to mistakenly assume that The Office star had come down with the coronavirus. Thankfully, that’s not the reason Krasinski was trending at all. As it turns out, Krasinski is launching a new YouTube series called Some Good News which, as the name implies, will focus on sharing positive stories designed to counterbalance the deluge of sad coronavirus-related stories that currently dominate the headlines.

Krasinski’s new show comes in the wake of the actor taking to Twitter last week and asking folks online to send him uplifting stories that made them smile or feel particularly good. The new series made a splash right from the get-go with Krasinski getting his former Office co-star Steve Carell to join in on the fun.

The first installment is about 15 minutes long and starts with Krasinski articulating the impetus of the show.

“Without question, we are all going through an incredibly trying time,” Krasinski said. “But through all the anxiety, all the confusion, all the isolation, and all the Tiger King, somehow the human spirit found a way to break through and blow us all away.”

After going through a few feel-good stories, Krasinski brought up the fact that we recently celebrated the 15th anniversary of The Office before bringing on “entertainment correspondent” Steve Carell.

Of course, it wasn’t long before the conversation drifted towards re-living some of the pair’s favorite memories from working on the show. When asked directly about what he remembers most fondly, Carell said it was the “exchange around the micro flat screen TV,” a reference to the Dinner Party episode from season 4 where Michael and Jan host Jim, Pam, Andy, Angela for what was supposed to be a nice dinner. If you recall, Dwight crashed the event and a series of hilarious and cringe-inducing scenes ensue.

The YouTube clip even includes a few outtakes from the flat screen scene that shows many of the cast members cracking up as Carell tries to show off how he can adjust the TV’s viewing angle ever so slightly.

The entire video can be seen below and is well worth watching if you need a much-needed break from the coronavirus news cycle. It’s also a great watch if you happen to be a hardcore Office fan and have been yearning to see Krasinski and Carell share the screen again:

There’s no indication when Krasinski might return with a new episode of Some Good News, but the video ends with a note for viewers to subscribe, because “we might just do it again.”