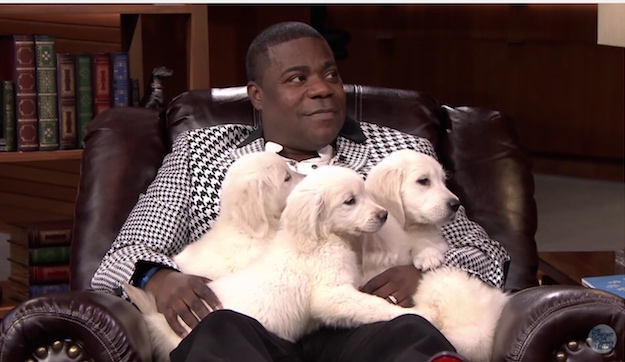 In the battle for late night supremacy, The Tonight Show Starring Jimmy Fallon continues to trounce the competition. Even The Late Show with Stephen Colbert, which got off to a strong start when it premiered, can’t seem to keep pace with Fallon’s antics. Indeed, one of the reasons why Fallon’s offering at NBC continues to do well is because the show has a knack for creating shareable and, every so often, viral videos. As a prime example, you might recall this video of Fallon and the cast from Star Wars: The Force Awakens singing an a capella tribute to the movie series.

More recently, Fallon’s old Saturday Night Live cast member Tracy Morgan was a guest on yesterday’s show where the two engaged in a rousing game of “Pup Quiz.” In a typically whimsical game, Fallon and Morgan were reclining in plush leather chairs answering oddball trivia questions. With each correct answer, an incredibly cute puppy (seemingly a labrador retriever) was provided as a prize. Does the premise of the game make any sense? Hardly, but it’s pretty much par for the course for Fallon; mindless fun that you can’t help but watch and enjoy.

So without further ado, let’s bring on the puppies. Make sure to keep watching until you get to the Double Puppardy round.