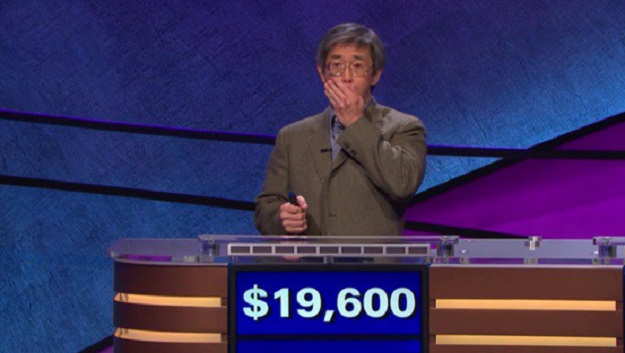 When game show clips go viral, they usually involve someone falling flat on their face and losing boatloads of cash, such as the hapless contestant who famously lost a chance to win $1 million on Wheel of Fortune.

Today, however, we’re bringing you something a little bit more uplifting. Earlier this week, Jeopardy contest Philip Liu was in the drivers seat late in the game. With $19,600 racked up and the game nearly over, the other two contestants had $13,600 and $4,000 to their name. Clearly, the game was Liu’s to lose.

With just seven questions left in the game, Liu chose to answer a $1200 question from the “Country & Town” category. Lo and behold, it was a Daily Double.

Without skipping a beat or even breaking a sweat, Liu confidently said he was going to bet $19,000, a whopping wager with the potential to see Liu drop from first to last place in the blink of an eye.

And so, Alex Trebek read off the question, or in Jeopardy parlance, the answer:

“The country’s busiest port, this southwestern Canadian city is about 15 miles from the U.S. border.”

Here’s how it all played out.

Philip lands on a Daily Double that gave him a big lead. Check out his $19,000 wager:https://t.co/kjvIsl0FYs