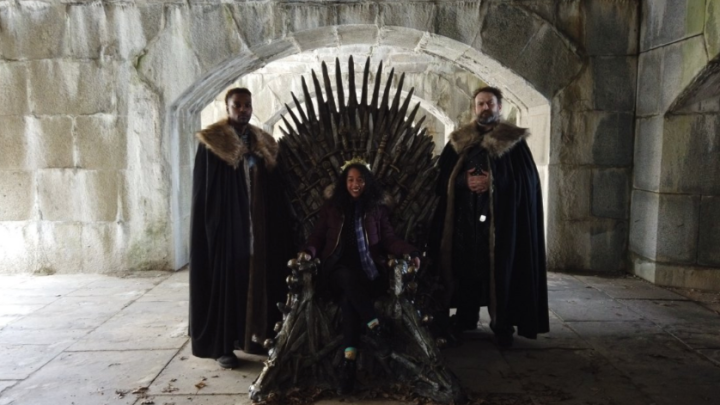 Fort Totten is a Civil War-era US Army facility in New York City — specifically, in the borough of Queens, situated on the north side of Long Island. Inside, the fortress has an almost gothic, otherworldly vibe in places, which may be why HBO chose it as the site wherein to hide the last of six Iron Thrones the network scattered around the globe as part of a promotion for the upcoming eighth and final season of its hit series Game of Thrones.

The first of the six iron thrones to be found on US soil, this one follows the discovery of thrones in far-flung locales around the globe from Sweden to Brazil, England, Spain and Canada.

As was the custom, two stern men in fur coats flanked the Fort Totten throne and stood ready to place a crown on the head of the winner — the winner this time being 22-year-old Melanie Joaquin of Queens. Fittingly, a tweet from the official Game of Thrones Twitter account declared her, simply, “The Queen of Queens”.

In an interview with The New York Daily News, Joaquin described the crown she was given as heavy, bejeweled and plated to make it look golden. HBO has been posting videos of the respective locations of each throne at https://www.forthethrone.com/quest, and once Joaquin saw the clip of the final throne she said she basically made a beeline for Fort Totten.

“I knew exactly where it was because every year the park has a haunted house, and it’s in that battery,” Joaquin told the newspaper. “The battery is basically where all the cannons were held, and it’s really creepy and it’s one of those places in New York City that you never forget. You can see spots in the wall that have cannonball dents.”

Since this was the only throne found in the US, Game of Thrones fans in the New York City area can come check it out through Monday at 7 p.m. It’s in the basement of the fort, and you’re welcome to go down and sit in it and take pictures as well. The “Quest For The Throne” promotion, HBO explained in a statement released this week and carried by the newspaper, “honors the distances traveled by characters in the show, and as the host of the world premiere, we felt it was only fitting to end this epic quest in New York.

“Fort Totten Torpedo Battery in Queens was selected because of its dark and ominous setting, reminiscent of the basement of King’s Landing, where the Mad King stored his destructive wildfire, and where Queen Cersei waged to destroy the Great Sept of Baelor.”