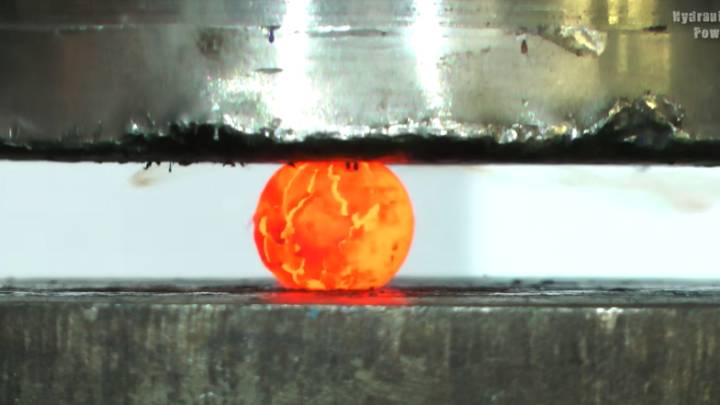 An emerging YouTube star loves to crush things with a hydraulic press, and people can’t seem to get enough of his videos. He’s not the only game in town with a hydraulic press though, and now other people have started experimenting with all sorts of different things they can crush with their presses. Several of them are quickly becoming YouTube sensations as well, and one recently decided to squash red-hot nickel balls with his press. As you might imagine, hot metal is no match at all for the power of one of these hydraulic presses.

Earlier this week, YouTube channel Hydraulic Power posted a video in which it crushes three red-hot nickel balls with a large press. The balls don’t stand a chance against the power of a 500-ton hydraulic press. In fact, if they weren’t so hot, they probably would have just shattered.

But then again, heating the nickel balls is the trademark of carsandwater, another famous YouTube channel known for pitting red-hot nickel balls against all sorts of objects.

It’s not clear whether the two channels partnered up for this experiment, but the video is still entertaining.

If you want to learn more about the real Hydraulic Press Channel guy and his fascinating YouTube channel, check out BGR’s exclusive interview.