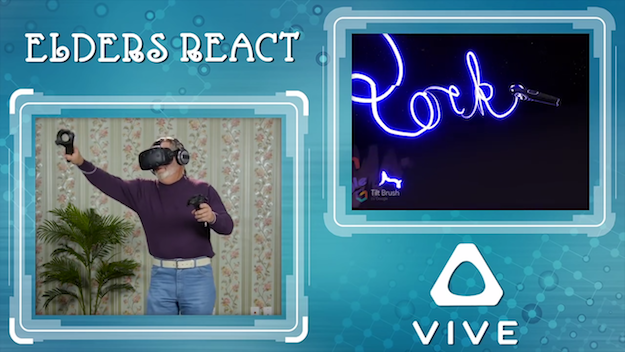 Although it hasn’t quite taken off like many pundits and enthusiasts expected it too, there’s no question that the era of virtual reality has begun. Both the Oculus Rift and the HTC Vive have made their way to thousands of homes around the world, and Sony’s PlayStation VR is just a few months away.

VR has definitely arrived, but that doesn’t mean that everyone is ready for it.

DON’T MISS: This might be the most ambitious Pokemon Go hack to date

It has been nearly two years since we shared the video of elderly people playing with an Oculus Rift for the very first time. It was an incredible, hysterical sight, but two years later, are they better prepared for the HTC Vive? Let’s find out:

If you guessed “no, they’re not prepared, and this is going to terrify them,” — ding ding ding! — you were right! If you haven’t personally donned an HTC Vive, you should know that it’s arguably the most immersive of all the current headsets on the market, thanks to room-scale VR.

You walk around in the virtual worlds that the developers have created, and before long, you start to forget that you’re not walking around in the real world. It’s a bizarre phenomenon, but one that I experienced myself when I reviewed the Vive.

If you want to jump head-first into virtual reality and be just as scared as the people in this video, you can order an HTC Vive today for $799.99.