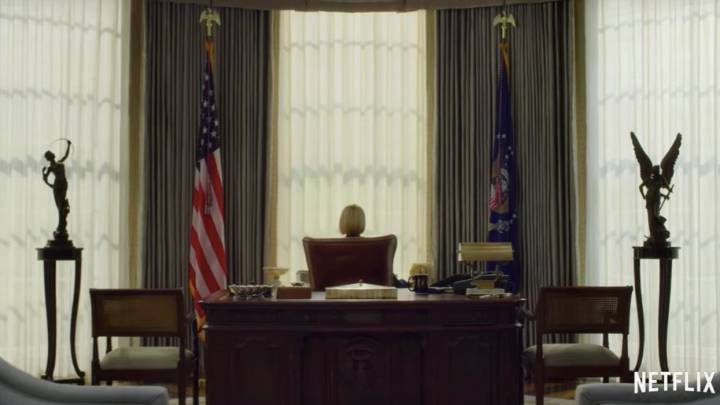 Netflix just couldn’t pass up the opportunity to drop a message from the sitting president on Independence Day. That would be Claire Underwood if you were wondering, who happens to be in charge of the White House right now.

If you chuckled that’s because you know who Claire is, and remember why she happens to be president. Yes, it’s her turn, as Netflix brilliantly teased the upcoming season of House of Cards. If you don’t know who Claire is, then you have plenty of time to discover the character until season six premieres later this year.

Netflix on Wednesday afternoon posted a teaser clip on Twitter that’s just 12 seconds long, enough to remind House of Cards fans that it’s Claire’s turn. But that’s not the only purpose of the video.

The teaser practically picks up from where the show ended in season 5’s finale. In the wake’s of Frank’s resignation, Claire breaches the fourth wall for the first time saying two words: “My Turn.” That’s right after ignoring a call from Frank, whom she was supposed to pardon.

“Happy Independence Day,” Claire (Robin Wright) says in the new clip, adding “to me,” right before the #MyTurn hashtag appears:

A message from the President of the United States. pic.twitter.com/yx0P3qyHfW

The clip doesn’t tell us when the final season will stream, but we do know it’s happening this year.

I did say the teaser has two purposes. The second one is an acknowledgment that season six is all about Claire. Frank was ousted from the White House in the show well before the real-life sexual harassment and assault allegation against Kevin Spacey became public. Spacey was subsequently fired, and Netflix decided to go forward without the main character of the show.

Dropping Spacey was definitely the right call to make in light of what happened. House of Cards was Netflix’s first original series, which spearheaded the company’s massive investment in original content. While the last seasons haven’t been as thrilling as the first one, it’s still a great Netflix show in my book, and I’m definitely psyched to see what Wright does with the character going forward.

Sadly, we don’t have a launch date for season six, but it’ll be all revealed soon enough.