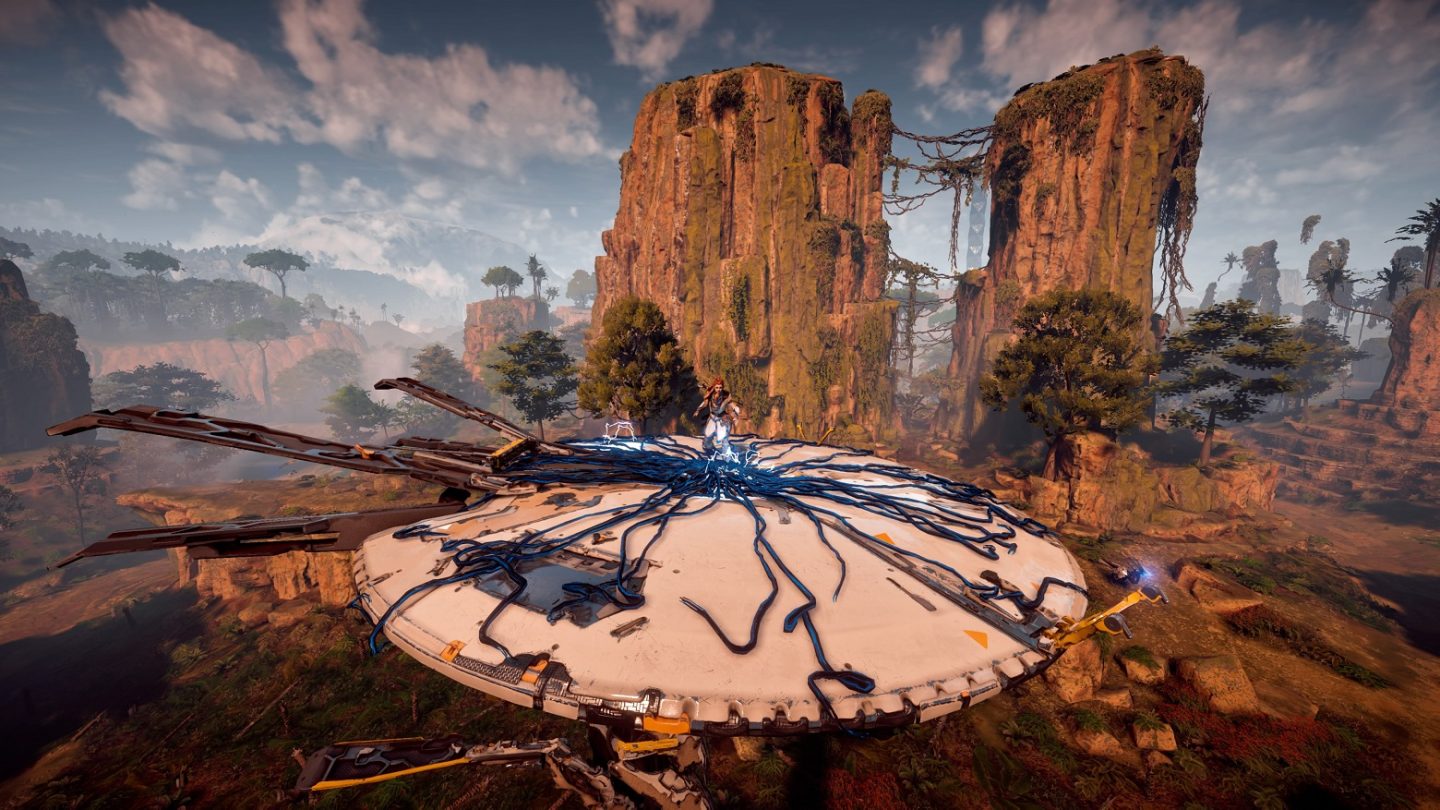 Aloy isn’t supposed to venture into the ruins of Devil’s Thirst. In fact, no members of the Nora tribe are meant to set foot in the ruins, but two braves wandered in anyway, so it’s up to Aloy, a young woman who had been an outcast from the tribe until just days ago, to bring them back unscathed.

Against her better judgment, she makes her way into forbidden territory. Once there, she activates her Focus to scan the area for signs of the missing braves and follows the tracks she finds deep into the ruins, where two fearsome, aggressive Sawtooths have forced the braves into hiding on the second floor of a derelict building.

Aloy does her best to stay hidden in the tall grass on the other side of the path, but she quickly realizes that the only way to reach the braves is to take out the machines. She sets up a shock wire trap with her Tripcaster to stun one of them and slinks back into the grass, notching an arrow in preparation.

What you need to understand about the Sawtooth, and Horizon Zero Dawn in general, is that Aloy always appears to be outmatched. Equipped with primitive tools and a limited understanding of their world, Aloy and the rest of the human inhabitants of this vaguely recognizable Earth are forced to contend on a daily basis with a race of territorial, dinosaur-like machines. Aloy was brought up in this world by a man named Rost, who serves as a father figure in her life. She doesn’t know what happened to her real parents. 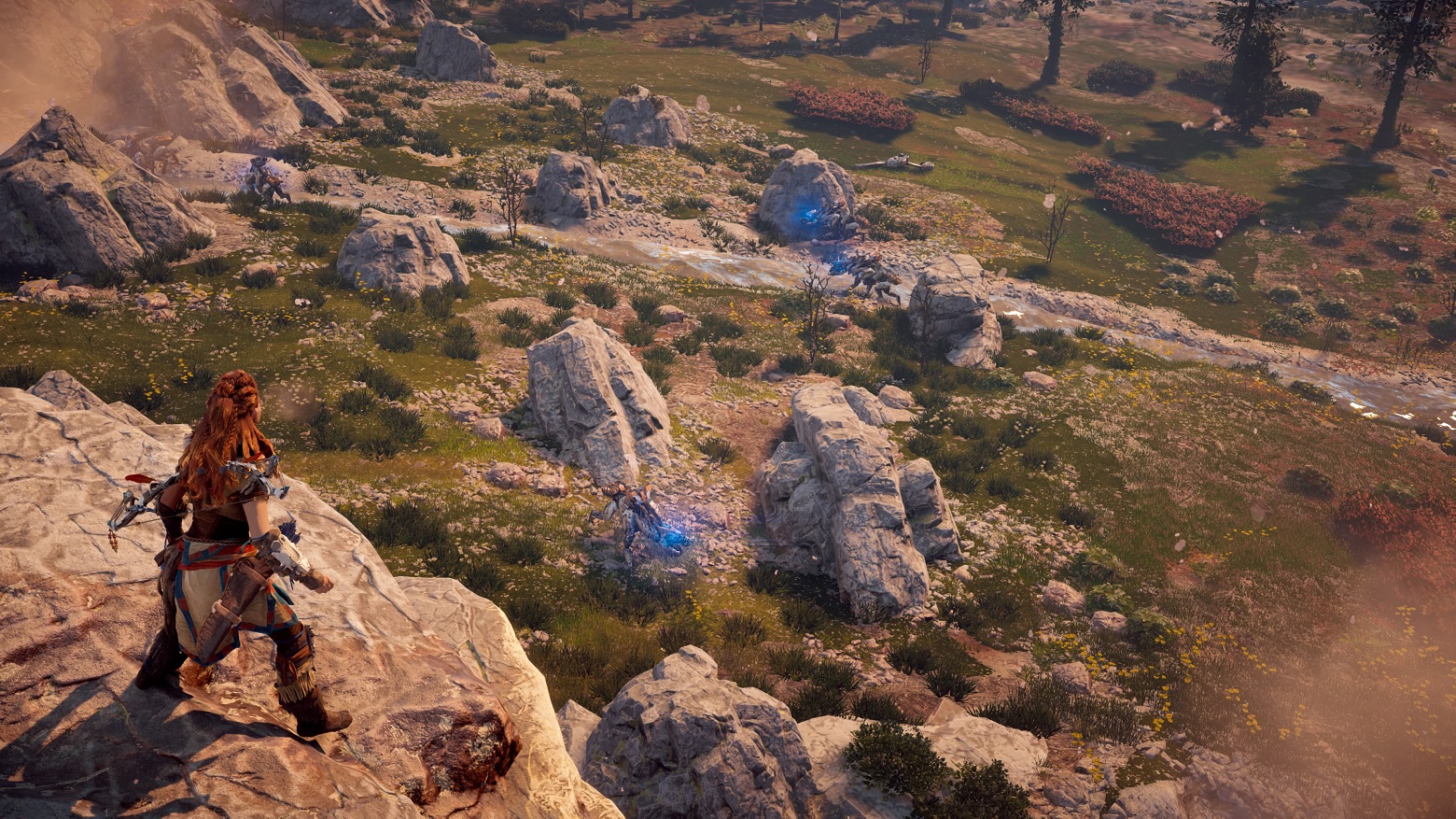 Rost lives in Nora territory, but was cast out from the tribe long ago (for reasons he refuses to share with the increasingly curious child). Therefore, Aloy grows up as an outcast as well, depending on Rost to teach her how to survive in a hostile world. But Aloy has a distinct advantage over Rost and the Nora tribe.

As a child, Aloy stumbled down a hill and fell into a pit. In that pit she discovered relics of a long dead society; a technologically advanced society much like our own. The Nora call the people of that society the “Old Ones,” and although Aloy does not understand the full significance of her discovery, she does come away with an electronic scanning device that attaches to the side of the head like a Bluetooth headset. With this device — something the Old Ones called a Focus — she is able to locate and tag enemies in the environment, track the movements of humans and machines alike and gather detailed information about the world around her.

Armed with nothing but a bow, her Focus and the wisdom passed down by Rost, Aloy learns to survive (and thrive) in the sacred land of the Nora people, growing up to become one of the more competent hunters in the region. This is where the game begins to open up, as Aloy prepares to participate in The Proving. If she can take first place in this rite of passage, she will be allowed to join the Nora tribe.

Her first two tasks are to craft fire arrows and barter for a weapon called a Ropecaster. There are multiple systems to familiarize yourself with over the course of the Horizon Zero Dawn campaign, from ammunition crafting to weapon modification, but developer Guerrilla Games does an admirable job at doling them out slowly and giving you a chance to master one before introducing another. 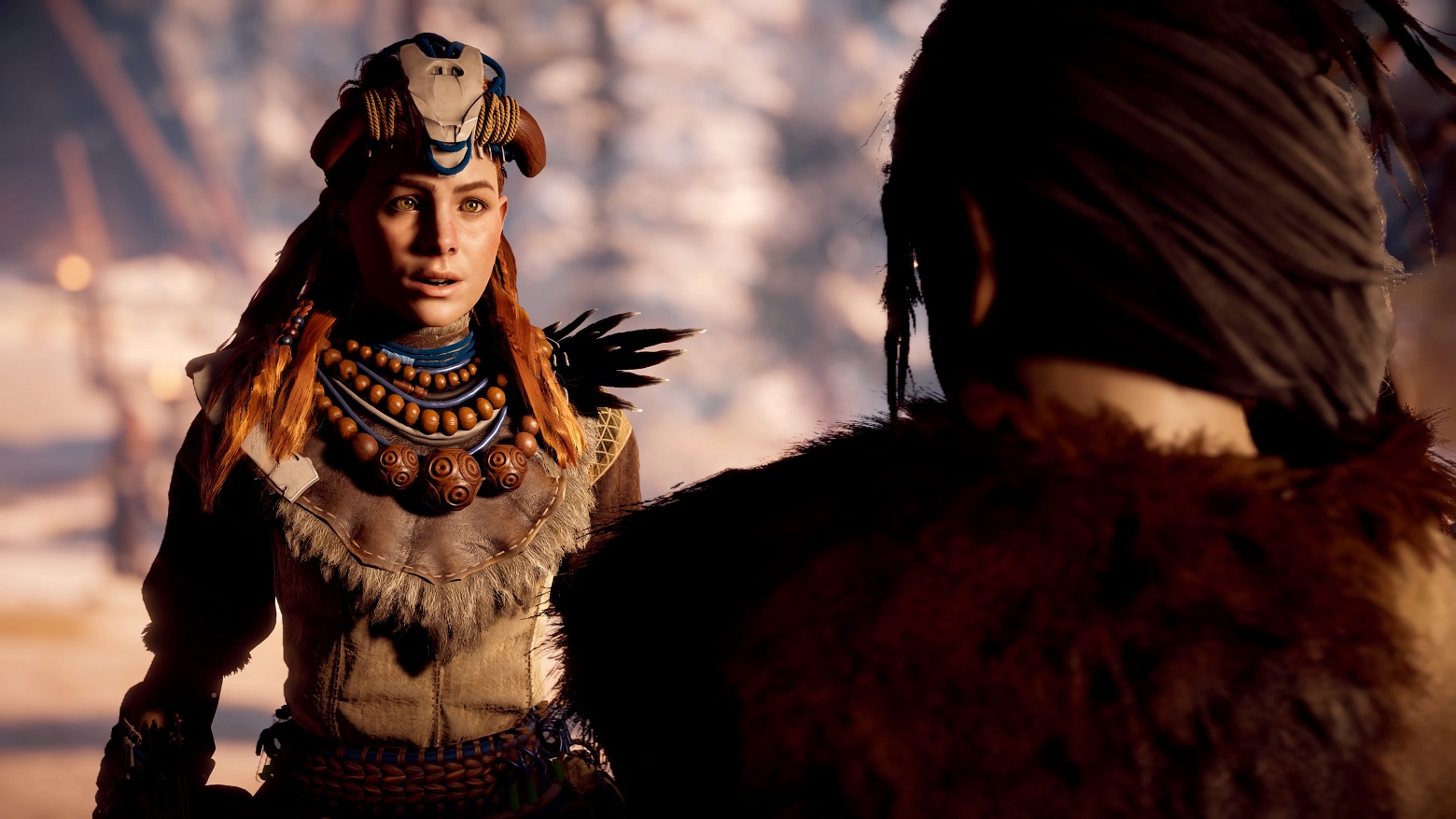 Of course, it wouldn’t matter how gradually the systems were rolled out if they were confusing and incoherent. Thankfully, they’re all easy to understand. Crafting ammo is as simple as holding down the L1 button to open the menu, navigating to the correct weapon with the right stick and holding X until the ammo has been crafted. It’s nearly instantaneous and time slows down while you’re crafting, which means that even in the heat of battle, you can fire your last arrow, open the menu and craft 20 more without missing a beat.

In order to craft those arrows though, you’ll need wood and metal shards. Metal shards you can find on the remains of defeated machines, but you’ll have to gather wood the old fashioned way: tearing it off of the trees scattered around the open world of Horizon. Gathering resources from the environment is a key element in the game — wood is used to craft arrows, plants are used to heal Aloy and machine parts are used to construct ammunition for some of the more advanced weaponry that you will acquire throughout your journey.

Having already spent a few dozen hours in the world of Horizon, I’ve never run out of ammunition for my bow or any of my secondary weapons. Gathering resources eventually just becomes part of your routine, and while it can be somewhat tedious to find the exact right boar skin or fish bone or Thunderjaw heart to purchase a new weapon or upgrade your storage capacity, it makes sense that Aloy would have to be self-sufficient in the context of the game. That’s what really ties Horizon together as a complete package: the world actually makes sense, and everything that Aloy and the other characters do coheres with the world they live in.

[I spoke at greater length about the cohesion of this fictional world in my preview, so read that if you like. And I’m realizing there won’t be a good spot to put this anywhere else in the review, but I played through the entire game on a PS4 Pro, and I can say without hesitation that Horizon Zero Dawn is the reason the 4K console exists. If you can’t tell from the screenshots, this game is an absolute stunner.] 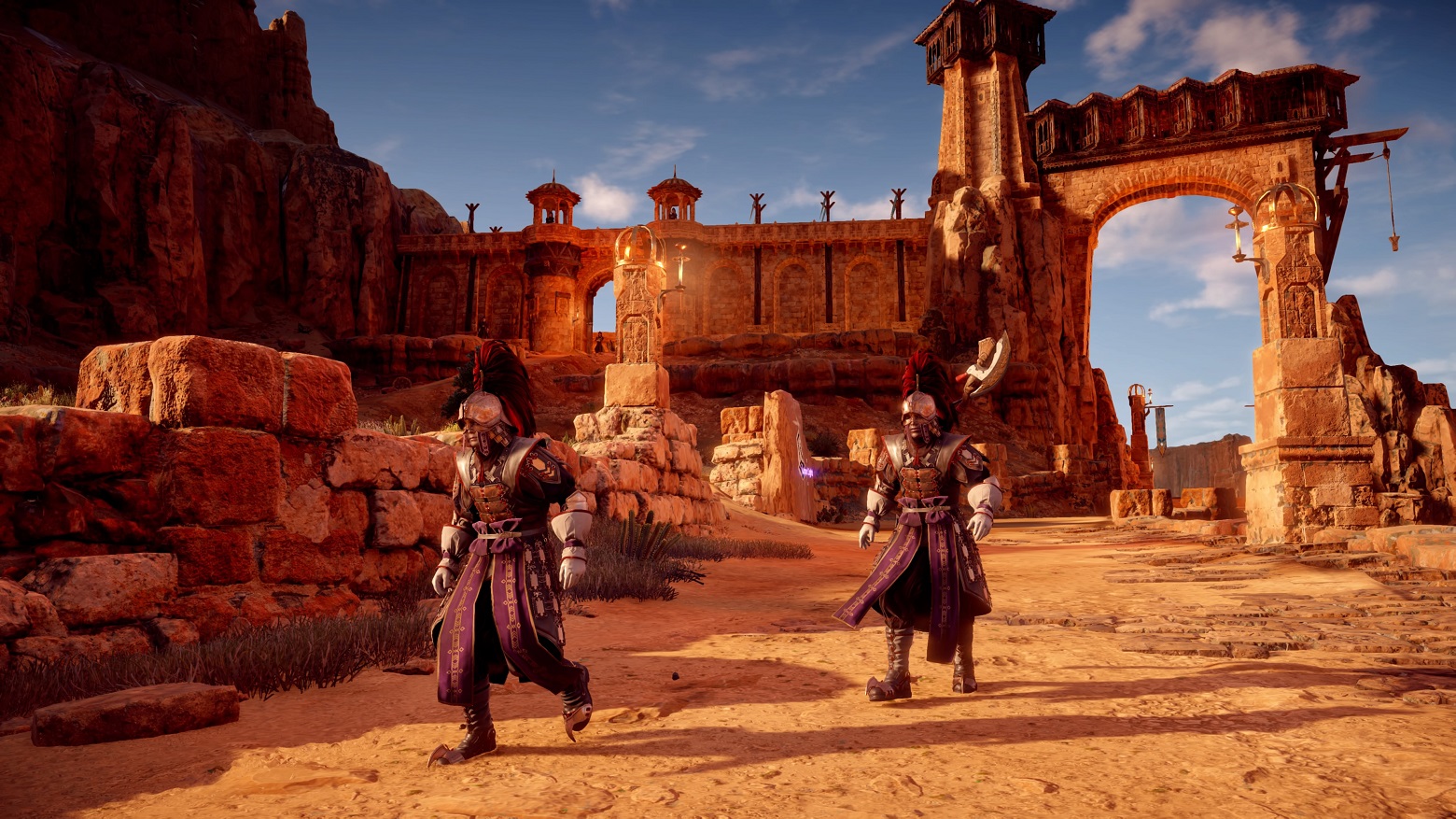 Once you’re done gathering resources and building an arsenal of weapons, you’ll have to utilize everything at your disposal to take down the machine and human enemies that blanket nearly every corner of the gigantic map. As I stated near the beginning of the review, Aloy is always at a disadvantage, whether she’s facing off against a machine twice her size or a camp full of unfriendly bandits.

Therefore, stealth comes into play frequently, as Aloy uses the tall grass around her to stay out of sight and her Focus to track and tag enemies in her vicinity. Picking off enemies one by one from a distance without alerting anyone else in the area is incredibly satisfying every time you do it, especially in some of the large bandit camps that function similarly to the outposts in the Far Cry games.

But stealth isn’t always an option. Some of the larger machines require dozens of arrows to take down, which means that after a few hits, ducking in and out of the weeds isn’t going to be an option anymore. This is where the game kicks into high gear, as you have to be quick on your feet, dodge rolling out of the way as the machine charges, quickly taking aim at a weak point, firing a few arrows and taking cover again.

It’s a loop that I never tired of, even in difficult fights with frustrating machines that refused to give me a second to breathe. Each type of machine has its own strengths and weaknesses, as well as its own temperament (for example, some will simply run away if you startle them), but by the time you’re exploring the far corners of the map, you’ll have the entire codex committed to memory.

And on top of all that, Aloy learns early on in the game how to “override” certain machines, some of which she can use as mounts to traverse her surroundings far more quickly than she’d be able to on foot. 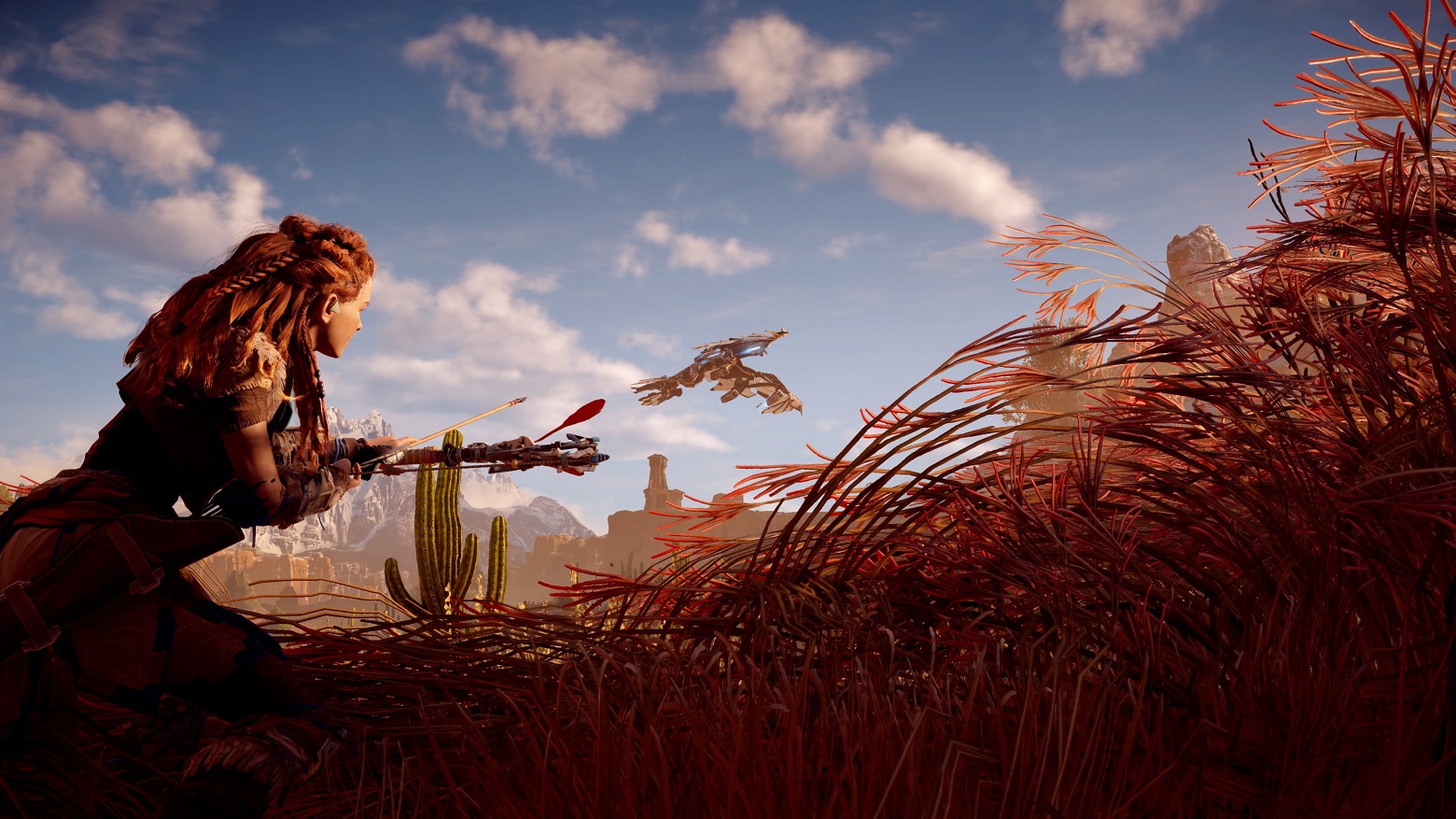 In many open world games, from Grand Theft Auto V to Just Cause 3 to Skyrim, the side quests and distractions are often the reason you play. Being able to run around a sandbox and cause chaos is why you bought the game in the first place — the story is secondary. In Horizon Zero Dawn, the opposite is true.

No hyperbole: Horizon Zero Dawn features the most compelling narrative of any video game of the current generation. In the beginning, Aloy just wants to know where she came from, but she soon realizes that her origin and the origin of the world she lives in are inextricably intertwined. As she journeys further and further from home, she finds herself wrapped up in an increasingly complex web of desperate locals, warring factions and political intrigue — but it’s all a backdrop for an even larger mystery.

Watching that mystery unfold is what will keep you coming back to Horizon Zero Dawn every day until you’ve seen it all play out from start to finish. There are dozens of side quests to complete, errands to run, machines to tame and gear to acquire along the way, but the plot is what you’re playing for.

I could write another 1,500 words about the strength of the voice acting (especially the impeccable Ashly Burch as Aloy), the simple but brilliant skill tree and the surprisingly listenable audio logs (which are often a storytelling crutch in video games), but I’ll leave it at this: Horizon Zero Dawn is the game of the generation and the best game available for the PS4. Guerrilla Games absolutely knocked it out of the park, and if they ever want to revisit this world, I’ll be first in line to see what happens next.

Sony provided BGR with a copy of Horizon Zero Dawn on PS4 for the purposes of this review.