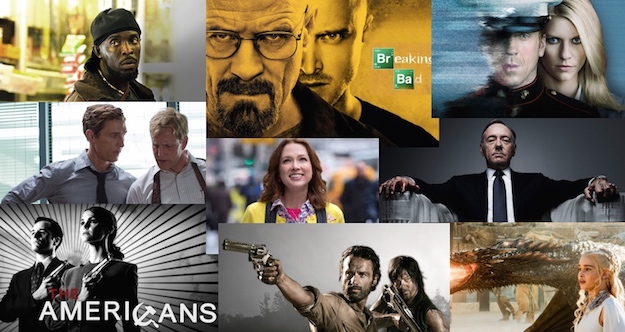 Not too long ago, TV fans only had to worry about keeping up with a few select shows at a time. Whether you were interested in staying up to date with The Sopranos or checking out what John Locke was up to on LOST, doing so was always manageable.

Today, the TV landscape is markedly different. While ordinarily a cliche, the phrase “too many shows, too little time” is undoubtedly appropriate in 2015. These days, it’s practically impossible to keep up with the onslaught of new shows constantly being released, not to mention a long list of retired shows that are now easy to binge watch thanks to the magic of online streaming.

With content producers working around the clock to develop more and more original content, trying to keep tabs on what’s new can be overwhelming. With the battle for consumer attention fiercer than ever, it’s no surprise that outlets like Netflix, HBO, Showtime, Hulu, Amazon, FX, and AMC are more than happy to spend untold millions in an effort to develop the next big hit show.

But what makes today’s TV landscape so incredible is that the quality of the programming itself continues to rise to unprecedented heights. Just when you think TV can’t get any better, some new show pops up and immediately sets an entirely new bar for quality and addictive programming.

That being the case, it’s only natural to wonder: where the best original content comes from?

Tackling the issue head-on, Andrew Dodson of Cut Cable Today recently put together an impressively exhaustive list detailing who has the best batting average when it comes to churning out original programming. Dodson’s methodology is particularly noteworthy because rather than just focusing on the ‘hits’, he takes a wide range of content into account. Notably, rankings were determined by looking at a show’s average Metacritic and Rotten Tomatoes scores. Following that, shows were then grouped together under the same content producer, providing an easy guide to help discern who’s really hitting it out of the park when it comes to delivering the shows that people absolutely love.

When the dust settled, HBO managed to take home the crown, with its stable of shows amassing an average rating of 82.3 on a 100 point scale. Somewhat surprisingly, the second and third slots went to Showtime and FX respectively, leaving Netflix taking up the fourth spot with a 73.6 rating.

For those wondering where Hulu is, not enough of their shows have ratings as to warrant inclusion in the tabulation.

Of all the shows evaluated, Netflix’s recently released Master of None had the highest score, earning an impressively high score of 96. Following closely behind were The Sopranos, Amazon’s Transparent, The Wire and Game of Thrones, checking in with respective scores of 95, 94, 94, and 92.

Other shows which managed to break the 90 point barrier include:

Some additional points of interest highlighted by the report include:

All good points, but the last two are especially worth exploring.

First off, Netflix remains committed to producing an ever increasing amount of original programming. Indeed, it’s why the company had no qualms about letting its move licensing deal with Epix expire. Throughout 2015, Netflix has released boatloads of new programming, much of it well received, with Daredevil and Unbreakable Kimmy Schmidt being two prime examples.

That being the case, does it matter if Netflix has a few duds in the mix? I’d wager that it doesn’t. As long as the company can keep on churning out compelling content in volume, viewers, I think, will have no problem overlooking a few strikeouts. After all, isn’t a service with 10 great shows out of 20 much more appealing than a service with 4 great shows out of 10?

While Netflix’s recent track record is rather strong, Dodson’s point about HBO is interesting. In fact, without classics like The Wire, Deadwood and The Sopranos buoying HBO’s overall ratings score, HBO’s final tally might have been noticeably lower. Aside from GOT, the only interesting new shows from HBO to have debuted in the last 2 years are True Detective and Silicon Valley. HBO obviously isn’t going anywhere, but it’ll be interesting to see if they can keep up with the aggressive pace set by Netflix.

Of course, it’s also important to remember that HBO and Netflix aren’t necessarily playing a zero-sum game. I spoke to Chris Brantner of Cut Cable Today on the topic and he brought up a good point:

“It’s clear HBO has become the measuring stick for quality original programming,” Brantner explained. “That being said, I don’t think Netflix has to BEAT them to compete. The beauty of the cord cutting movement is that it gives viewers multiple options. There’s plenty of room in the space for multiple content providers, and it’s clear that HBO and Netflix are two of the biggest fish in a small pond.”

Solid points all around. And as we’ve highlighted previously, signing up for even a few streaming services is still markedly cheaper than a respectable cable package.

Make sure to hit the source link below for even more information about how different shows from varying services rank.