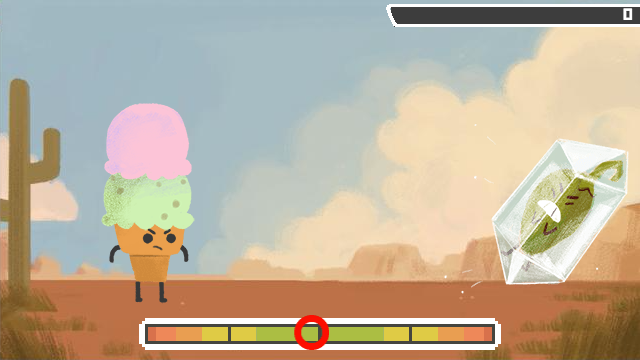 Looking for ways to bide the time before the incoming snowpocalypse wipes away the East Coast? Google’s got you covered! On Friday, the company updated the Google Doodle on its homepage in honor of the 151st birthday of Wilbur Scoville — the chemist who found a way to measure a pepper’s heat.

UP NEXT: 25 hidden iPhone features that are really, truly hidden

“Spiciness is somewhat of a universal, comical experience, which I think opened the door for us to do something we usually might not be able to, like a fighting game,” writes Olivia Huynh, the Doodler behind the game. “I started making storyboards for how the game could unfold while engineers worked on building prototypes. Then I started sketching and making draft art to put in the prototype, so we could see what the experience would be like in interactive form.”

The game is basically a series of “boss fights” against increasingly hot peppers, preceded by short animations of Scoville himself eating the peppers and then slamming down an ice cream cone to combat the heat. It’s your job, as the ice cream cone, to freeze the pepper and save Scoville from his own scale.

In order to play the game, all you have to do is head to Google.com and click the play button on the image at the top of the page. Once the game begins, you can either click the mouse or tap the space bar to throw a scoop of ice cream.