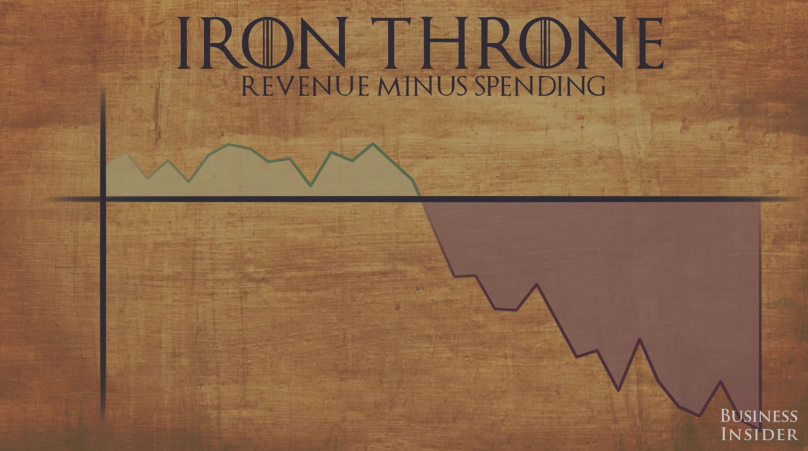 Forget real politics for a second, as we’re about to embark on a far more important mission this month: Season 5 of HBO’s best show ever, Game of Thrones. And the question is, can the Lannisters make Westeros great again?

Think about it! The king is inexperienced, the realm is tormented by uncertainty and war. Dragons are mature enough to vanquish armies. And winter is coming. In other words, the economic state of Westeros is in shambles and things aren’t looking good for the Lannisters.

In a brilliantly serious look at the monetary problems the Lannisters are facing, Business Insider explains the economic side of business in the Seven Kingdoms, using details and clues from the books and the four prior seasons of the show.

As you can see in the clip below, the Lannisters have tough times ahead, not only because of their mounting debt, but also because they’re not going to be able to make enough money in the foreseeable future.

While this kind of analysis sounds boring at first, it really isn’t. The financial details presented in the video are amazing, and should definitely play a role in the long battle over the Iron throne. For example, the analysis tells us that gold coins might contain less gold, so that Littlefinger can print more money. Food prices are going to increase, while the cost of services including prostitution will fall.

The analysis also shows that, for the Lannisters, losing the throne would be a financial disaster. So they’d better find ways to turn the economy of the kingdom around and deal with the fiscal instability that’s coming.