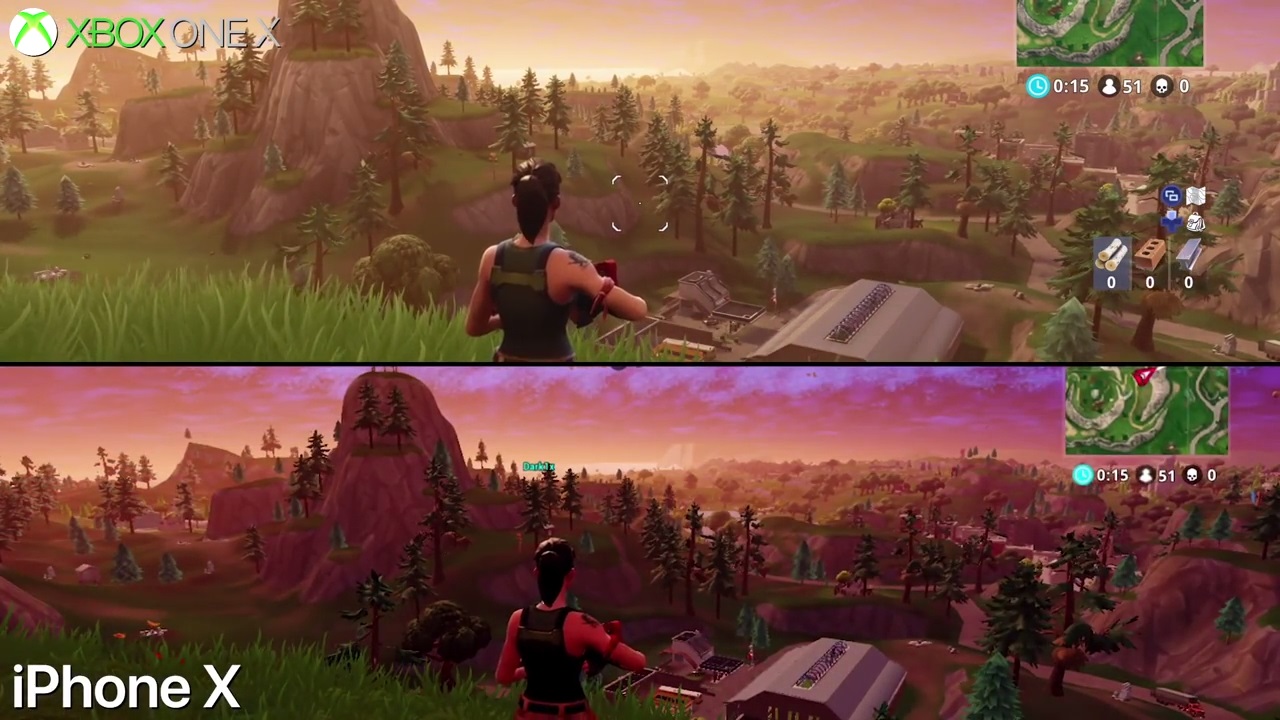 When Epic Games announced earlier this month that Fortnite would be heading to mobile platforms, fans of the game were understandably curious about how an online multiplayer game with a massive open world would translate to less powerful devices. Now that more and more users are being accepted to the closed beta event, we’re beginning to see how the game performs on a variety of different devices, and the results are rather impressive.

Digital Foundry had a chance to stack the iPhone X and Xbox One X versions of Fortnite up against one another, and despite the fact that the Xbox One X is the most powerful game console ever released, the mobile port holds its own. In fact, from the menu screen to the opening moments of a match, the two versions look basically the same.

While Fortnite has seen significant visual upgrades on the PS4 Pro and Xbox One X since launch, it’s stunning how similar the island looks on the iPhone X and the Xbox One X as the player jumps off the party bus at the beginning of the round. The differences become more obvious when viewing the footage side-by-side, but even if you’re used to the 4K visuals of the console version, you might not notice them when you jump in on an iPhone X.

Once you land and begin searching for weapons and loot, the compromises become more apparent. Digital Foundry notes that the shadows no longer update instantaneously with the position of the sun, foliage isn’t animated, wind and lightning effects have far less fidelity and the lighting has been “visibly reduced” on the iPhone.

But overall, the look and feel of the game has been preserved to a surprising degree. And more importantly, the game runs at a solid 30 frames per second on the iPhone X with minimal hiccups throughout a match. Of course, that won’t stop it from sucking up battery, as Digital Foundry discovered that “90 minutes of Fortnite drained 75 per cent of the battery.” You’re going to need a battery pack if you want to play for a few hours at a time.

Digital Foundry also tested the game on an older iPhone 6s, and you can read about it over on Eurogamer.