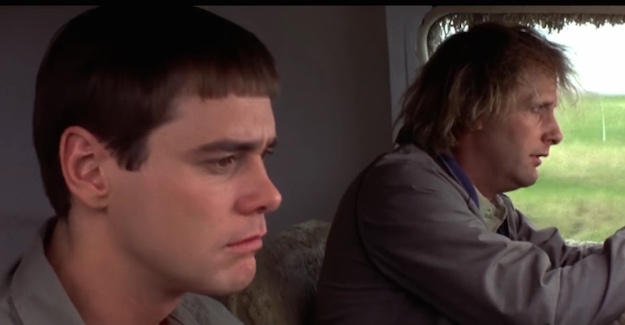 I’ve long been a fan of movie trailer recuts and recently stumbled across a new gem: the 90s classic comedy Dumb & Dumber shot as an Oscar worthy film. Starring Jim Carrey and Jeff Daniels, Dumb & Dumber is a famously goofy film, which made me a bit skeptical that there was even enough footage that could be repurposed as dramatic scenes.

But to my pleasant surprise, the trailer delivers; a few quotes taken out of context, some inspirational music, and wallah!, a seemingly moving and touching film that mirrors some of the more common themes found in traditional Oscar worthy movies.

The basic plot of the recut trailer is rather simple. Lloyd Christmas, played by Jim Carrey, is a down on his luck guy with no real purpose in life, that is, until he meets an intriguing woman he can’t get out of his head.

Intent on traveling to Aspen to meet up with this woman, the trailer teases Chirstmas’ inspirational transformation from a man who is “sick and tired of being a nobody” and “having nobody” into a man willing to conquer all odds to reach his goals. All in all, the trailer is very well put together and worth a few laughs. Make sure to check it out below.

And just for kicks, you can check out the film’s original trailer if you’re inclined to do a quick comparison and witness the very real power of editing.