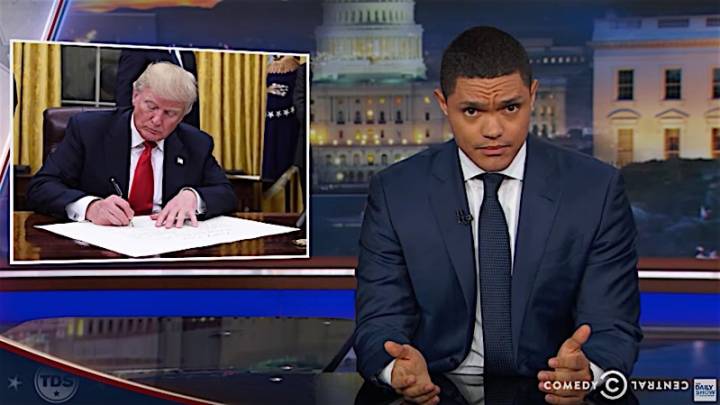 After a full week in office, Donald Trump gives off the impression that he’s looking to keep some of his campaign promises — he also gives off the impression that he’s going to lie to the American people and the world whenever he wants. Trump got a lot done this week, including signing plenty of executive orders, some scarier than others. Does that mean that everything he said he was going to do will get done? Yes and no. And Trever Noah has a hilarious take on the whole thing, explaining exactly what it all means.

Noah explained on The Daily Show on Thursday that signing papers is one thing. Getting stuff done, that’s something else.

“A lot of people think that signing these orders means Trump is making up new laws, but that’s not true,” Noah said.

“Now, since being inaugurated on Friday, and, yes, it’s only been five days, people, I know it feels like five years but it’s five days, Trump has signed about a dozen executive orders, which is a lot, but some of them don’t mean anything,” he continued.

One such order concerns Trump’s inauguration day which will he declared to be the National Day of Patriotic Devotion.

Others, like the wall, are more meaningful. But just because Trump signed the order, the wall won’t simply start building itself.

“In this case, he still needs Congress to allocate the money for it,” Noah explains. “So basically this is like when a kid makes one of their Christmas lists. You can ask Santa for a pony, but unless your parents go spend money at the pony store, your ass ain’t getting a baby horse.”

Then again, some executive orders are more dangerous than others. The wall order first effect was Mexico’s president pulling out of a scheduled meeting with Trump, so there’s that too. Other immigration-related orders, concerning sanctuary cities and the Muslim ban will have immediate effects.