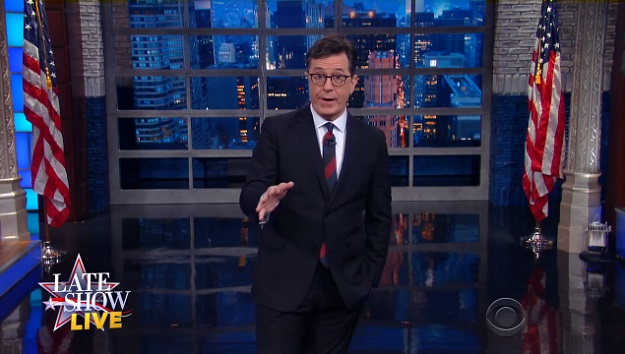 On account of all the media hype surrounding last night’s Presidential debate between Donald Trump and Hillary Clinton, CBS yesterday aired a live taping of The Late Show with Stephen Colbert so that Colbert could really dive into the circus-like atmosphere that underscored the entirety of yesterday’s debate.

Hitting the nail on the head, Colbert opined that the debate lived up to the hype and it didn’t take long for Colbert to start delivering a few laugh out loud zingers and ridiculous observations.

“The expectations for the two sides were very different,” Colbert began. “For Hillary to win, she had to be confident, not smug. Knowledgeable without being a know-it-all. Charming but not offensive. Commanding, but not shrill. Likable, warm, authoritative and not coughing.

“Meanwhile, Donald Trump had to not commit murder… on camera,” Colbert said to laughter from the audience. “And that low bar was reflected in Donald Trump’s debate prep. Instead of doing a bunch of mock debates, the word is that he sat down with friends over bacon cheeseburgers, hot dogs and glasses of coca-cola and tested out zingers.

“Meanwhile, Hillary was so prepared my new nickname for her is Preparation H. Yeah, it’s a compliment. In the primaries she already proved she could soothe the Bern.”

Colbert’s full skewering of all things Presidential can be seen below. If last night is any indication, the roller coaster that is the 2016 U.S. Presidential election won’t be ending anytime soon. And in case you missed it, you can check out a recap of the funniest Twitter reactions to last night’s debate over here.