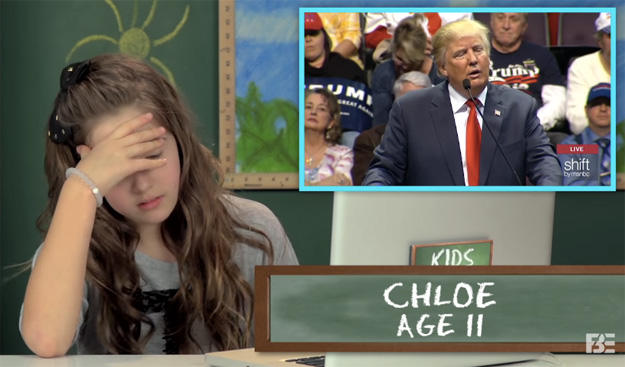 Ladies and gentlemen, this is the reaction video you’ve been waiting for.

We’ve seen reactions all over the Internet from Donald Trump’s supporters, who tend to be as enthusiastic and outspoken as Trump himself when discussing politics with people on social networks and other forums. We’ve also seen plenty of reactions from people who oppose Trump, and they’re certainly also not shy in letting the world know how they feel publicly. Privately, they’re trying to figure out how to move to Canada if Trump actually does become our next president.

Now, it’s time to see how kids react to The Donald’s campaign.

Here are a few choice quotes from the kids’ reactions, as recorded by The Fine Brothers:

“It hasn’t been easy for me,” one girl said in a wonderfully breathless and sarcastic tone, “but I’m filthy rich.”

“He’s like a five-year-old. He throws tantrums about stupid things.”

Of Trump and presidential hopeful Ted Cruz arguing on stage, one young boy offered a wonderful insight: “It’s kind of like me and my brother!” Another child added, “they’re both like the Real Housewives of Beverly Hills.”

And after watching Trump suggest that John McCain isn’t a war hero because he was captured, one girl responded, “you don’t really joke about that kind of stuff. It’s really serious.”