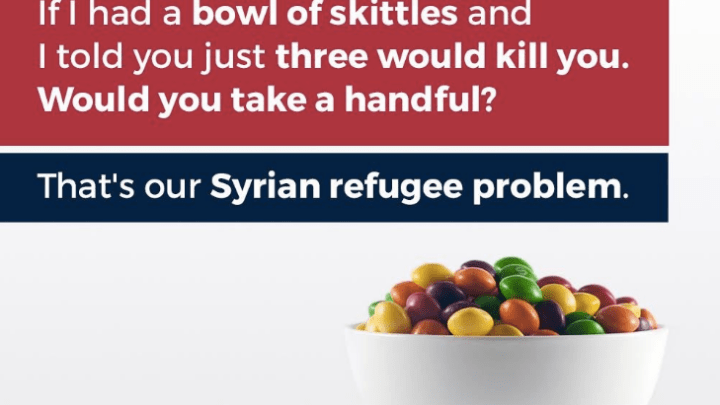 Like many of us, Stephen Colbert was both horrified and intrigued.

SEE ALSO: 9 of the coolest things Google’s new Assistant can do in Allo

As Colbert points out, not only is the math a little off, but the grammar is just atrocious. “If I had a bowl of skittles and told you just three would kill you” is not a complete sentence. Also, it’s Skittles. It’s a proper noun. The word “skittles” is not some generic word for “small candies.” This image carries the stamp of the Trump/Pence 2016 campaign. Why didn’t someone glance over it first?

But more important that the grammatical disaster (but only slightly) is the fact that the bowl in the image probably contains something like 60 or 70 Skittles. We’re supposed to believe that 3 out of every 60 or 70 Syrian refugees want to kill us? That our odds of being killed by a refugee are nearly 5%?

As it turns out, a recent study by the conservative Cato Institute shows that the odds of an American being killed by a Syrian refugee in a terror attack are 1 in 3.64 billion. That’s billion with a “b.” I’m no statistician, but I’m fairly certain 1 in 3.64 billion is less than 5%. Nevertheless, Skittles has already released a statement:

A rep for @Skittles gives me their response to @DonaldJTrumpJr pic.twitter.com/OmkJQkIqug