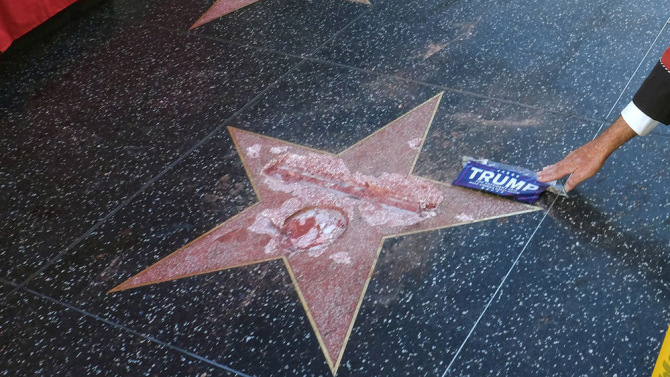 Eleven days. That’s it, just eleven more days. The most ridiculous, hilarious and depressing run-up to an election that this country has ever endured is nearing its end. In the end, we all lose — the only question is whether we lose or we lose. As can only be expected, the lowbrow nature of this cycle has trickled down from the candidates themselves and permeated the country. The latest personification came in California earlier this week when a man dressed up as a construction worker took a sledgehammer and a pick axe, and went to town on Donald Trump’s Hollywood Walk of Fame star.

Now, the Los Angeles Police Department has confirmed that a suspect has been arrested.

The suspect, who police have identified as California native James Otis, was not difficult to find. After all, the entire incident was captured in a video. Otis dressed himself as a construction worker and began hacking away at Trump’s Walk of Fame star with both a sledgehammer and a pick axe until Trump’s name was completely removed. Half the country (give or take) applauded while the other half (give or take) booed, but Otis’s stunt was an act of vandalism regardless.

BGR sister site Variety confirmed on Thursday that Otis was in police custody and was being booked in downtown L.A. Men’s Central Jail.

In a statement, Hollywood Chamber of Commerce CEO Leron Gubler condemned Otis’s actions. “People can make a difference by voting and not destroying public property,” he said.