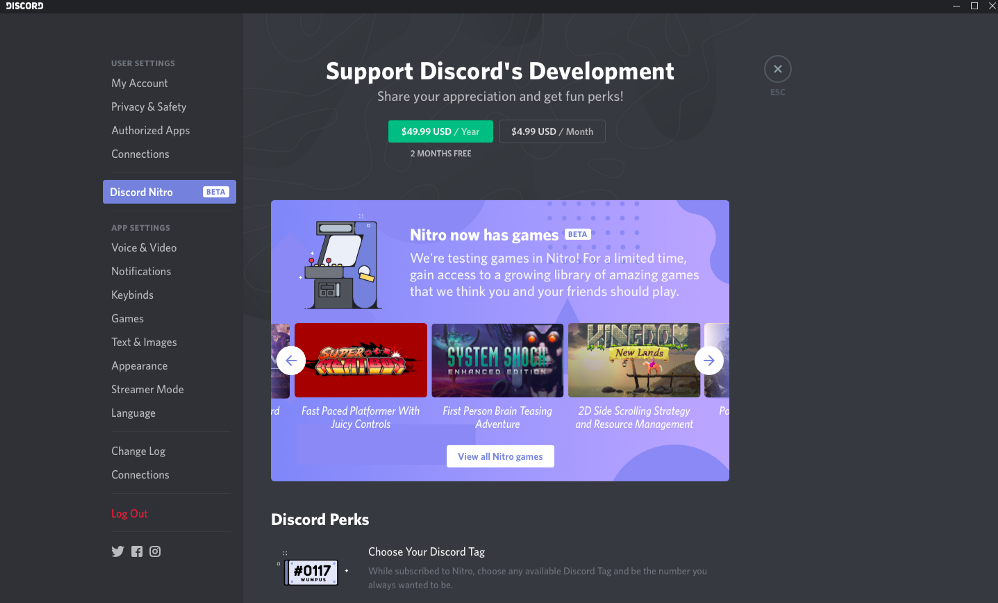 It’s game time for Discord, the gaming community used to bring together some 150 million gamers that has now decided to get into, well, actual games.

The chat and video service has announced the beta launch of a curated games store that has begun rolling out to 50,000 users in Canada today. In a blog announcing the move, Discord says those players will see an upgraded version of Discord Nitro that has access to a curated selection of games along with the current subscription perks.

“For many people like us, you grew up during a time when there were a relatively small amount of games being released,” the company explains about the new service, which costs $4.99 a month or $49.99 a year. “We remember devouring Nintendo Power, PC Gamer, and other various gaming mags to get a sense of the titles coming out. We were always longing for the next best title. Always anxious to get our hands on something fresh.

Along with the upgraded Nitro, Discord is keeping current Nitro features as part of the perks, like animated avatars, the ability to choose your own tag, custom emoji anywhere, animated emoji and more. In terms of the curated game experience, meanwhile, Discord says it’s aiming to reproduce the kind of thing you see in boutique, indie bookstores — the ones that have little notecards attached to shelves beneath books with recommendations from store employees.

Discord thinks that kind of thing could “reduce clutter” and make it easier to find the kind of game you want.

“We’ll be showcasing a variety of titles that we think you’ll like,” Discord’s announcement reads. “As the store grows, we’ll rely on our community and our team to make the store feel super personal and focused on games that we genuinely think you’ll enjoy!”

According to Variety, the retail store will initially sell games that include Dead Cells, Frostpunk, Omensight and Into the Breach, to name a few. Indie games will also be part of the store via a “First on Discord” title focus. Those will be indie games Discord has helped bring to life.

They’ll be temporary exclusives — titles that live on Discord for, say, 90 days and then the developers can sell anywhere else they want. The beta won’t have any of those titles, but they’re coming soon.

“Through Discord’s lifetime, we’ve always been thinking about fun, additive, and cool ways we could build a business that’s exciting and respects our players,” Discord’s announcement concludes. “We think the new Nitro and store are a great way to do this.

“Ultimately, we want to make it easier for you to play games and spend time with your friends. This Nitro boost, store experience, and library will make it easier to find, share, and jump into games with friends all in the same place you already hang out.”