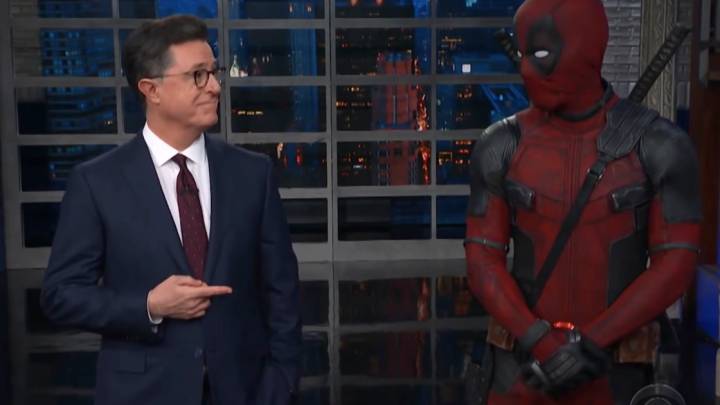 It’s Deadpool 2 week, which means you can expect plenty of Ryan Reynolds’s — I mean Deadpool’s — TV stunts and promos ahead of the release of the highly anticipated sequel. So far, we’ve seen Deadpool partner with Celine Dion for what has to be one of the best music clips of the year, as well as David Beckham, in a glorious promo for the movie. Deadpool is back again, this time crashing Stephen Colbert’s monologue and doing lots of trolling in the process.

By the way, if you still haven’t seen Avengers: Infinity War, you should know that naughty Deadpool just dropped a naughty spoiler in the best possible way.

What seemed to be a regular Colbert monologue on The Late Show took an abrupt and hilarious turn once Deadpool dropped in. Who could blame him, after all, since Stephen was mentioning all the wrong superhero names coming out this year.

It didn’t take Deadpool — yes, that’s Reynolds in full costume — very long to take over Colbert’s monologue, dropping plenty of great zingers of his own. The best part comes right at the end when Deadpool has to go away. But he doesn’t just walk out like a regular guest. He turns to ashes, the kind of death experience many people will instantly recognize.

“Oh god, I don’t feel well,” he says, right as he starts evaporating. “What the f***? Thanos? You don’t have the budget for this Colbert!” That’s all Mr. Blake Lively had to say before he vanished into thin air.

Right at the end of Infinity War, Thanos snaps his fingers and half of the population in all universes, including half of the Avengers we’ve grown to love, turn to ashes — just like Deadpool. Watch the hilarious clip below.