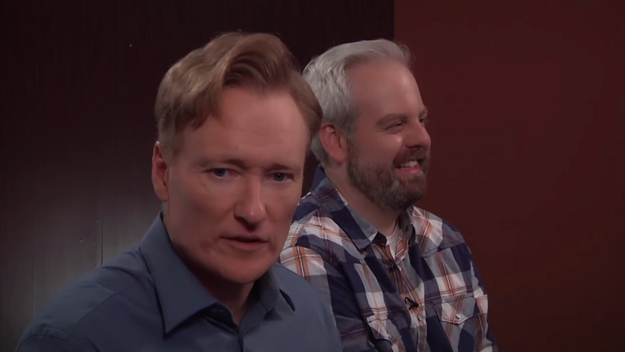 Over the past few years, Conan has become an awkward icon in the gaming world thanks to his Clueless Gamer series and his inexplicable appearances at the E3 exposition in Los Angeles, California. Conan went to E3 again this year, but it appears that we didn’t see the entire extent of his visit back in June.

On Thursday, Conan’s YouTube channel shared a clip of Conan chatting with Shigeru Miyamoto, Nintendo legend and creator of such storied franchises as Super Mario Bros., The Legend of Zelda and Donkey Kong. But Conan wanted to know just one thing — what’s up with all the mustaches?

As Miyamoto explains, when he was working on the original Donkey Kong game, he had to give Mario a nose. Unfortunately, the technology at the time didn’t exactly give him a large canvas to work with, so the mustache was necessary in order to separate the mouth from the nose. Otherwise, Mario would be nose-less.

Conan’s not much of a gamer, but he did seem genuinely intrigued by this explanation. Maybe this’ll be enough to reignite his “passion” for the medium and push him to make a new Clueless Gamer segment soon.