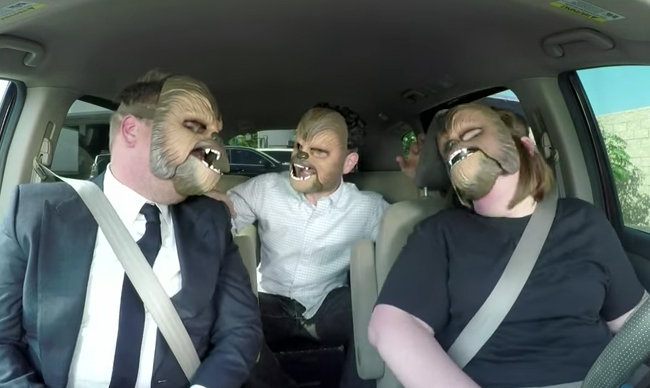 Unless you’ve been disconnected from the Internet this past weekend – and who does that, am I right? – you’ve probably seen and shared the hilarious Chewbacca mom video on Facebook. The clip shows a Texas woman trying out a Chewbacca mask and enjoying every minute of it. Her contagious laugh is what turned the video into a viral sensation that has since surpassed 140 million views.

That’s all you need to know before you watch the following video, in which we see the Chewbacca mom taking James Corden and J.J. Abrams to work.

DON’T MISS: Apple’s next MacBook Pro will be like nothing we’ve ever seen

Candance Payne, a mom from Texas, became an internet sensation thanks to her Chewbacca stunt, and Corden had her on The Late Late Show on Monday night, where she appeared in a carpool sketch that makes perfect sense given the nature of her original video.

Payne reenacts her Chewbacca video at the beginning of the sketch, so you’ll think it’s just a rerun of her video. But then the camera pulls out, and we see an impatient Corden, who’s looking to get to work.

That’s when Abrams, who directed Star Wars: The Force Awakens, appears, ready to give Payne some Chewbacca notes. Check out the clip below:

Payne played it really cool, but she freaked out when she actually met Abrams just before shooting the carpool sketch. Corden also aired that video of that meeting during his interview with the Chewbacca mom: