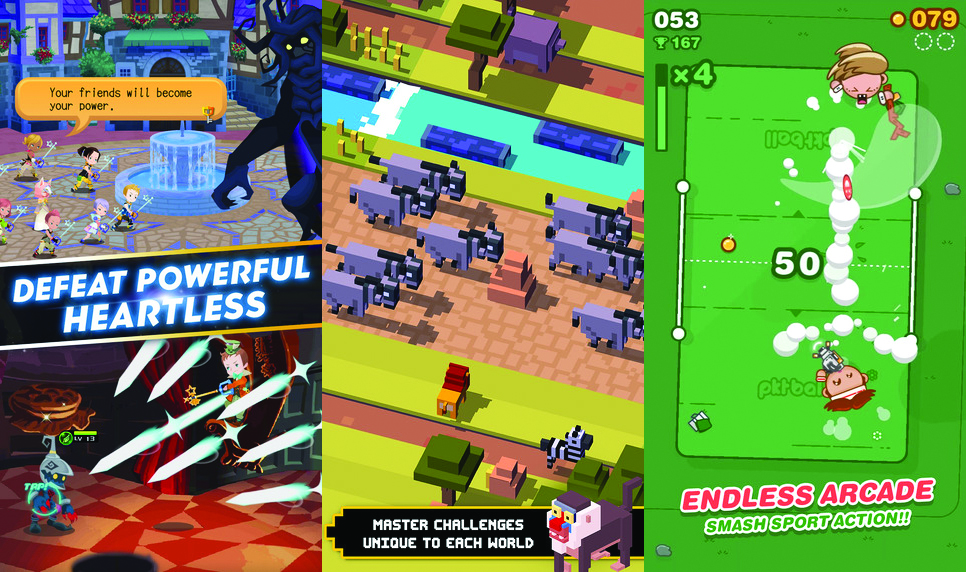 Not every gamer has been enthused by the rise of free-to-play gaming on mobile devices, but it gives everyone a chance to try out all kinds of new experiences without ever spending a cent (unless they want to).

In fact, there are so many new games released every month that it can be hard to keep track, which is why we’ve decided to round up five of the best free iPhone games that launched in April that you need to try.

From Hipster Whale, the makers of the original Crossy Road™ with over 120,000,000 downloads, and comes Crossy Road—an all-new take on the 8-bit endless adventure to cross the road without splatting!

Tap and swipe your way to a record-setting number of steps with 100+ and Pixar figurines while dodging crazy and unexpected obstacles in the 8-bit worlds of Toy Story, Zootopia, The Lion King, The Haunted Mansion, Tangled, Wreck-It Ralph, and more.

Adventure across Disney’s magical and wondrous worlds in the first mobile app for the beloved KINGDOM HEARTS series!

Become a hero at the very beginning of the KINGDOM HEARTS story in the era of the Lost Masters. Gather LUX—a mysterious form of light—and fight the Heartless as you explore Disney’s worlds. Meet familiar faces and strengthen yourself and your Keyblades!

As it’s ancestor, Loop Drive 2 is a casual arcade racing game with a gameplay incredibly easy to get started but frustratingly difficult to master. Basically, all you have to do is drive in circles and avoid crashing your car.
Adjust your speed as you accelerate and brake at the right moments to avoid crashing into another vehicle.

Earn more coins with every loop, unlock cars, expand your collection and see what suits you best. Survive as long as possible, as you train your reactions, climb leaderboard with higher scores and challenge your friends.

Prepare to smash it! A hyper-charged arcade smash sport designed to test your skills and reflexes to the max. Fight your way through the leaderboard and become a PKTBALL master!

Collect dozens of awesome PKTBUDDIES, featuring DotBoy the retro console, Brains the zombie, Mixtape the vintage cassette and many more. Each PKTBUDDY comes complete with a new court and unique soundtrack, and special guest PKTBUDDIES include PUK, ALONE, HOPIKO as well as other exciting characters!

Take control of the mighty War Tortoise, a heavy tank armed to the teeth with powerful weapons and automated turrets! Equip weapons, recruit units, build defenses, collect resources, and ultimately defend against a huge onslaught of enemy forces. Combining a shooter, idle gaming, and tower defense, War Tortoise is a unique mix of gaming that anyone can enjoy!