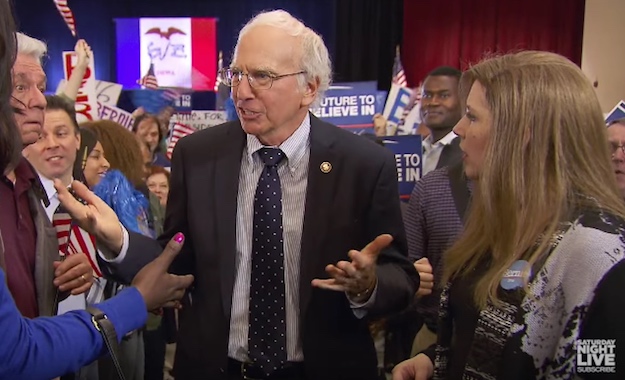 If you’re feeling a bit let down from one of the most boring Super Bowl games in recent memory, we have just the thing to turn your day around. Over the weekend, Larry David hosted Saturday Night Live and delivered an all-around great performance with no shortage of memorable moments.

One of the episode’s highlights, without question, was a digital short titled “Bern Your Enthusiasm.” As the title implies, the short features Larry David assuming the role of Bernie Sanders in a politically themed spoof of HBO’s Curb Your Enthusiasm.

Aside from David’s hilarious and accurate portrayal of Sanders, the clip hits it out of the park thanks to SNL cast members delivering a number of great Curb Your Enthusiasm character impressions, including Bobby Moynihan as Jeff Greene and Jay Pharoah as Leon Black.

The clip works tremendously well because it really captures the vibe and comedic sensibilities of Curb Your Enthusiasm, a welcome treat given that there’s still no word on whether or not there will be a new season anytime soon (an issue which David has been rather coy about in interviews). So in the meantime, we’ll just have to make do with this.