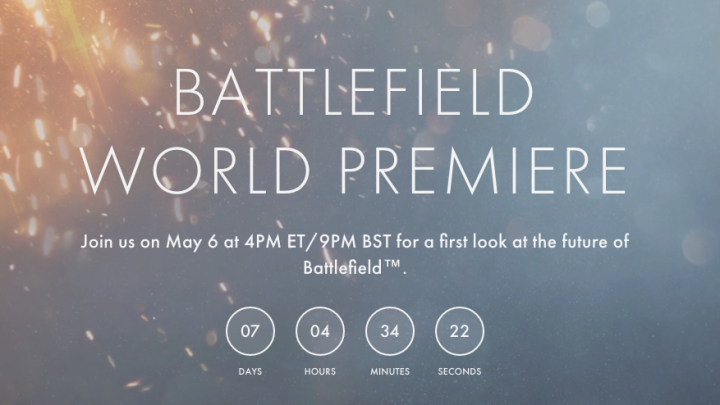 Just days after several surprisingly plausible Call of Duty leaks slipped through the cracks, EA announced that it would hold an official world premiere event for the next Battlefield game on May 6th at 4 p.m. ET.

Unfortunately, EA’s ship seems to be far less leaky than Activision’s, as the existence of the world premiere event is just about all the information we have regarding the next entry in the Battlefield series. An explosion of some nature is all we can see on the event page, but some fans think the phrase “the future of Battlefield” might be a hint as to the setting of the sequel.

It’s certainly a possibility, but there have also been rumors that the next Battlefield will return to World War I or World War II. In other words, unless there’s a major leak between now and next Friday, we’re going to have to wait and see.

As for the premiere event itself, fans can expect to hear from creative director Lars Gustavsson and lead producer Aleksander Grondal about the new entry and the franchise as a whole. With the EA Play event just over a month away, EA likely won’t give away everything about the game next week, but we should at least see a trailer.

Be sure to tune in for the world premiere event on May 6th at 4 p.m. ET.