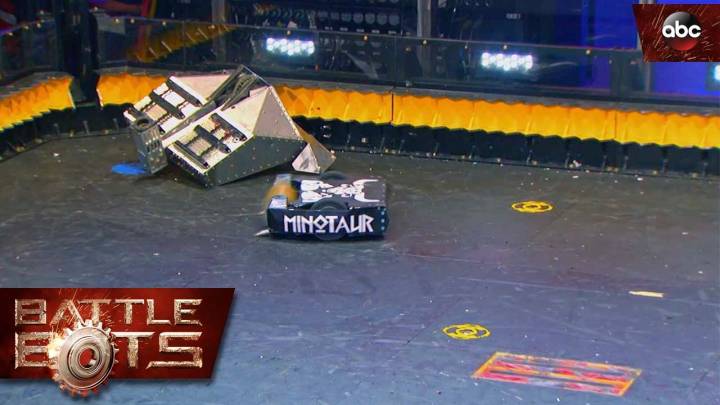 Battlebots is very transparently all about watching lovingly-built machines getting smashed to pieces. There’s no X Factor-style character development, no American Ninja Warrior sob stories. It’s two metal robots fighting to death in a cage, and it doesn’t get better than this match between Minotaur and Blacksmith.

The series only recently returned to our screens after a multi-year hiatus, but it’s not been off to a slow start. The TV show is famous for having entries from Mythbusters hosts Adam Savage and Grant Imahara, so it’s no surprise that things get quite messy quite quickly. But I’m still a little surprised that this match ended in flames.

The battle pitches two very different robots against each other. Blacksmith is an all-over armoured bot that tries to push and pin other robots with its plough front, and then smash them into submission with a hammer. Minotaur takes a very different approach, preferring to be squat and low to the ground, and drive underneath opponents and hit them with a spinning drum.

The match starts well for Blacksmith, which pushes its opponent into a bunch of the cage’s obstacles. But it can’t damage Minotaur, and eventually, the spinning drum gets the better of the hammer of doom.

I don’t know why watching someone’s pride and joy bursting into flames is so pleasurable, but for some reason, competitive destruction on this scale makes for seriously good TV. Don’t question it — just sit back, watch the inferno, and enjoy.