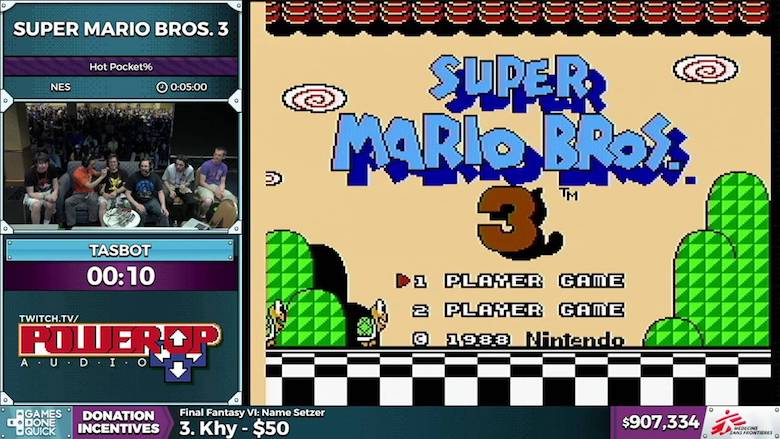 For the eighth consecutive year, some of the most talented video game speedrunners in the world will gather in Virginia for the week-long Awesome Games Done Quick charity livestream. Kicking off at noon on Sunday, January 8th, Awesome Games Done Quick 2017 will be broadcast live on Twitch, 24 hours a day, until it wraps up early on the morning of January 15th following the completion of Undertale.

If you’ve never tuned in to a Games Done Quick marathon before, the conceit is fairly simple: dozens of gamers gather in a hotel and race through video games as quickly as possible. Whether or not you have ever had any interest in watching someone beat a video game on a stream, I implore you to give it a shot.

Plus, all the money that the Games Done Quick crew raises will go to the Prevent Cancer Foundation, so you’ll be supporting a good cause just by watching the stream and sitting through a few advertisements.

You’ll need to visit the Games Done Quick schedule page to see the complete lineup of games being played this year (which is incredibly long), but some of the highlights on Sunday include Ocarina of Time 3D at 1:10 PM, Psychonauts at 5:30 PM, Mega Man at 7:39 PM and Devil May Cry at 11:16PM.

Other popular games such as Super Smash Bros. Melee, Metroid Prime 2, Fallout: New Vegas, Super Mario Bros. and the new Doom from 2016 are all on the list as well, so be sure to carve a few hours out next week to watch. All the speedruns will be archived on the Games Done Quick YouTube channel.