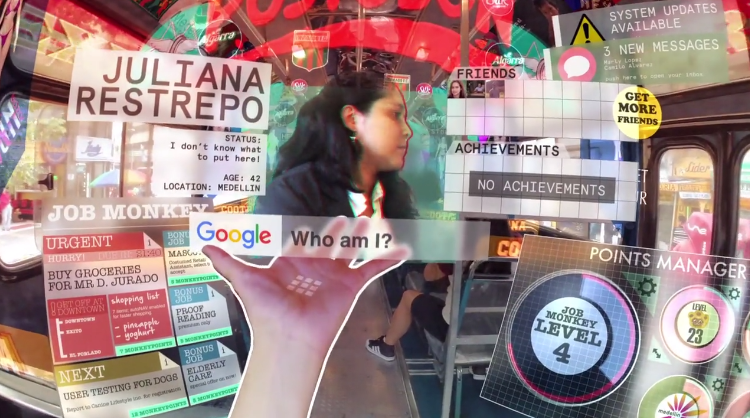 Our dystopian, tech-dominated future is always said to be an ad-invested hell where we’re all slaves to our devices. But what would that actually look like? This video shows you, and it’s really not pretty.

Hyper-Reality is a digital short from Keiichi Matsuda that’s supposed to present “a provocative and kaleidoscopic new vision of the future, where physical and virtual realities have merged, and the city is saturated in media.”

What it does — quite successfully, I should add — is make me want to destroy all electronics with a rock, and go live in a cave. The short follows a few minutes in the life of a “gig economy” worker doing someone else’s grocery shopping for them. The worker is wearing some kind of augmented reality glasses that make the entire world around them smart, but also festooned with ads and content.

The film is part funny, part terrifying. Workers for Uber and Postmates talk all the time about being “slaves to the app,” something that Uber always shoots down with faux-cheery features — no authoritarian boss, just a “guru” trying to cheerfully remind you that you’re missing all your targets and you’re about to be fired.

There’s other worrying elements in the film — the worker’s device begins to be hacked, and we start to see how the entire world is fake. Adverts for products and customer service reps are all targeted towards the individual for maximum effectiveness, and screw honesty or integrity. Finally, the glasses shut down, and we get a brief glimpse of the real (and very drab) world. Soon enough, we’re back in the land of adverts.