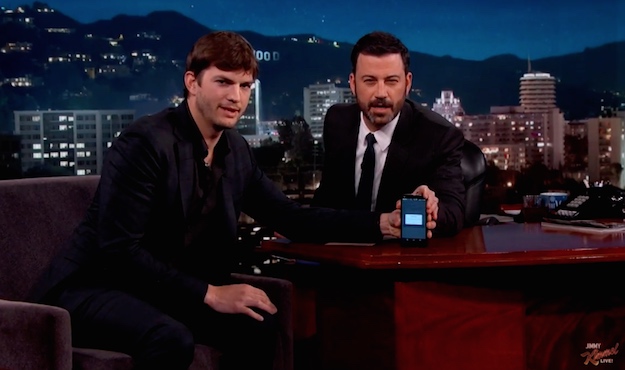 Appearing on Jimmy Kimmel Live yesterday, A-list celeb Ashton Kutcher and Jimmy Kimmel decided to check their respective Uber ratings live on the air. While passenger ratings on Uber used to be a closely guarded secret that were only accessible via various hacks and work-arounds, the ridesharing company this past September finally made such information easily accessible.

Kutcher obviously didn’t show up to talk about Uber, but as one of the company’s early investors, it’s not at all surprising that the topic veered in that direction.

Out of 5 stars, Kutcher had a rating of 4.79. Kimmel, who is known to be an insanely generous tipper and all-around model customer, just barely edged out Kutcher with an Uber rating of 4.8.

In effort to explain why he fell short of Kimmel’s mark, Kutcher told the following story.

“I know what happened,” Kutcher said. “I had an incident… I had a night with Mila’s dad where we were drinking vodka, and I was not driving home, and the Uber was of great assistance.”

“So you got carried in the house?” Kimmel asked.

Incidentally, if you’re interested in checking your own Uber rating, here’s how to do it.

Open up the Uber app and hit the hamburger menu icon located on the upper left of the screen. Next, tap the ‘Help’ menu. From there, scroll down to and tap the ‘Account’ menu. Following that, select “I’d like to know my rating” and you can then see how you measure up to big shots like Kutcher and Kimmel.