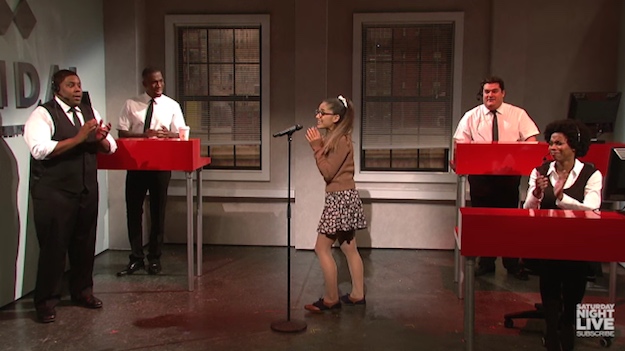 To be honest, I was a little bit surprised that Tidal – the music streaming service backed by Jay-Z – would even be considered popular enough to warrant being mocked by Saturday Night Live. But who knows, perhaps Kanye West’s recent Twitter tirades and sporadic references to his new album being exclusively available on Tidal gave the service a temporary publicity boost.

Whatever the reason, Ariana Grande over the weekend, along with the rest of the SNL cast, mocked Tidal in a sketch that was seemingly geared more towards showing off Grande’s vocal skills than delivering some laugh out loud moments.

The premise of the sketch is rather simple: Grande takes on the role of a Tidal intern who finds herself thrust into the spotlight after the streaming music channels of certain artists temporarily go down. First up, the Britney Spears stream goes down, forcing Grande, playing an employee named Chloe, to deliver a spot-on Britney impression.

Following that, Grande did a solid job of pulling off impersonations of Shakira, Rihanna, Celine Dion, and Whitney Houston.

As for how Tidal continues to perform as a business, the service did see a discernible uptick in popularity when Kanye West’s The Life of Pablo album was released, but the company still managed to mismanage the album launch amid reports that many users who paid for the album were unable to access it. Not only that, but some users even reported that they were being charged multiple times.

All in all, this weekend’s episode of SNL was decent while providing nothing likely to stand the test of time. For anyone interested in seeing SNL at its best, make sure to check out this list of SNL’s most popular sketches from 2015.