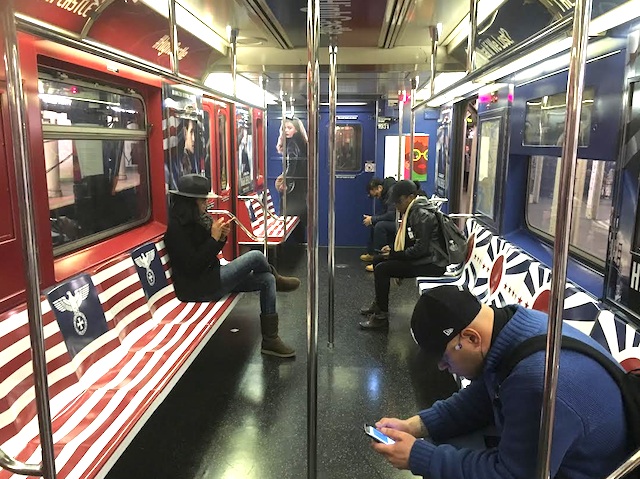 Decorating a New York subway car with symbols from the second World War might be one of the best ways to promote The Man in the High Castle, a new Amazon TV show based on a book with the same title that imagines what the U.S. would be like had the Axis (Germany and Japan) won. But while Amazon’s marketing scheme might be brilliant, it’s also rather questionable, especially given the current events in the world, some backed by extreme political and religious views.

As you can see in the image above, a subway car is packed with symbols that some people will recognize, including insignia for Nazi Germany and Imperial Japan. The symbols are adapted to match the movie’s plot – America is divided between the two powers after the war – with Nazi Reichsadler eagle replacing the stars on the American flag.

Some train passengers might object to these visuals, but the MTA actually approved the ad campaign.

“Half the seats in my car had Nazi insignias inside an American flag while the other half had the Japanese flag in a style like the World War II design,” Ann Toback, a passenger on the train, told The Gothamist. “So I had a choice, and I chose to sit on the Nazi insignia because I really didn’t want to stare at it.”

Toback added that she’s not opposed to the TV show but that she “shouldn’t have to sit staring at a Nazi insignia on my way to work.”

“The updated standards prohibit political advertisements. Unless you’re saying that you believe Amazon is advocating for a Nazi takeover of the United States, then it meets the standards. They’re advertising a show,” MTA spokesperson Adam Lisberg said. “Despite your, or my, or anyone’s feelings about a particular ad, we have to be guided by the ad standards we put forward.”

The ads aren’t actually promoting extremism, but they do remind people of one of the darkest periods in modern history, especially as they might not make sense to all passengers who take the train – the TV series is only available on Amazon.

“On the television program, which explains this is the notion of an America controlled by Hitler, you get that context,” Anti-Defamation League’s New York regional director told The Gothamist. “On the train, seeing the American flag paired with a Nazi symbol is viscerally offensive, because there is no context as to what it means. The fact that the flag is spread across the seats only compounds the effect.”

“This ad campaign has a feel of exploiting things that are so sensitive to so many people.”

Amazon The Man in the High Castle