Microsoft’s Xbox One and Xbox One S appear to have fallen well behind Sony’s PS4 lineup during this console generation, but sales numbers hardly tell the whole story. The Xbox One is a terrific video game console and multimedia hub, but there is one pretty annoying issue: typing is a huge pain in the butt. If you’re going to use your Microsoft gaming box for anything other than just gaming, you definitely need to pick up an Xbox One Chatpad, which is discounted right now on Amazon (including a free headset). 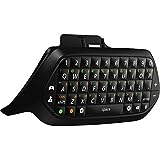