Prime Day doesn’t officially begin until 9:00 PM ET on Monday, but it’s already shaping up to be the biggest shopping event in Amazon’s history. There will be tens upon tens of thousands of deals ripe for the picking, and they’ll of course be available to Prime subscribers only. Well, sort of… if you’re not a Prime subscriber you can still sign up for a free 30-day Prime trial, and you’ll be able to score each and every Prime deal without paying a penny.

We’ve already told you everything you need to know about Prime Day 2017 in general, and we also gave you a detailed explainer of how Amazon’s special Prime Day voice shopping deals will work. But there’s a third way to score hot Prime Day 2017 deals: in Amazon’s physical stores. And wouldn’t you know it, the most sought-after gadget on the planet will be in stock at Amazon stores on Prime Day, July 11 only. That’s right, we’re talking about the Nintendo Switch.

Amazon has confirmed that it will have Nintendo Switch consoles in stock at its physical store locations on Tuesday. Only Prime members will be able to buy one, and supplies will likely be limited. It’s important to note that Amazon has dozens of pop-up stores around the United States, but only Amazon Books locations will have the Switch in stock. Here’s the complete list of Amazon Books locations:

If you don’t live in one of those areas, sadly you’re out of luck. You can still buy a Nintendo Switch with Gray Joy-Con or a Nintendo Switch with Neon Blue and Neon Red Joy-Con on Amazon’s website, but you’ll have to pay a premium. On, and once you get your new Switch, don’t forget to check out our latest list of every single Switch game you can purchase and pre-order right now. 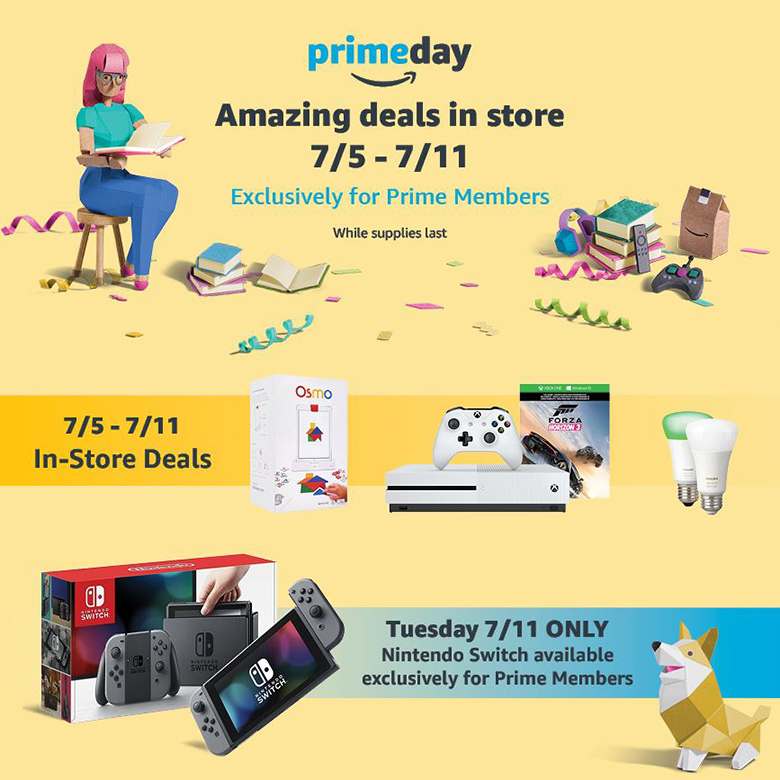