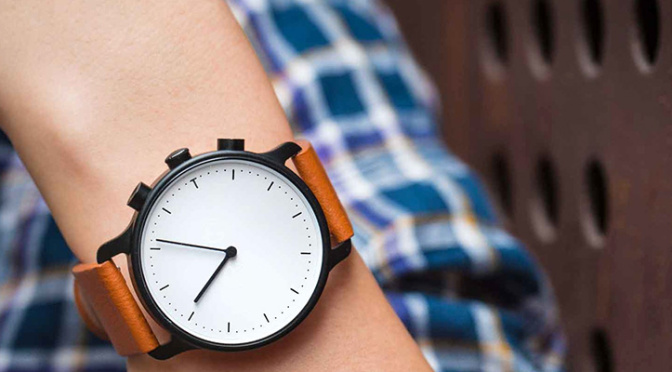 Taste is always a matter of preference and something that looks gorgeous to one person might look like junk to another. While that will always be the case, there are some things that most people can agree on. And in the case of smartwatches, many people seem to agree that most examples we’ve seen so far features designs that aren’t nearly as stylish as more conventional watches. There are a few that look alright — the Apple Watch and Samsung’s Gear S2 come to mind — but good old mechanical watches are still often a bit more… classy.

Well, now there’s finally a smartwatch that’s smart enough to not look like a smartwatch. It’s time to meet the Nevo Smartwatch for Android and iOS.

That’s right, the Nevo Smartwatch will work with your phone whether it’s powered by Android or iOS, so if you ever decide to jump from one ship to the other, you’re still covered. And this isn’t a “geeky” smartwatch like most of the ones you’ve seen. It’s actually a real mechanical watch with an actual Swiss movement, but it also packs smartwatch features like notification alerts, as well as activity tracking features.

In other words, it’s a single sleek device that can pull duty as a smartwatch, a fitness tracker, a sleep tracker and a Swiss timepiece.  In fact, separate batteries power the smart features and the watch features; the quartz movement will run for five years on one battery, while the battery powering the smart features will need to be recharged every one to five months — which is still pretty impressive.

The Nevo Smartwatch is just $299.99 on Amazon with free Prime shipping, and it comes with three different band options. If you want smart functionality without the look of a smartwatch, definitely check it out.