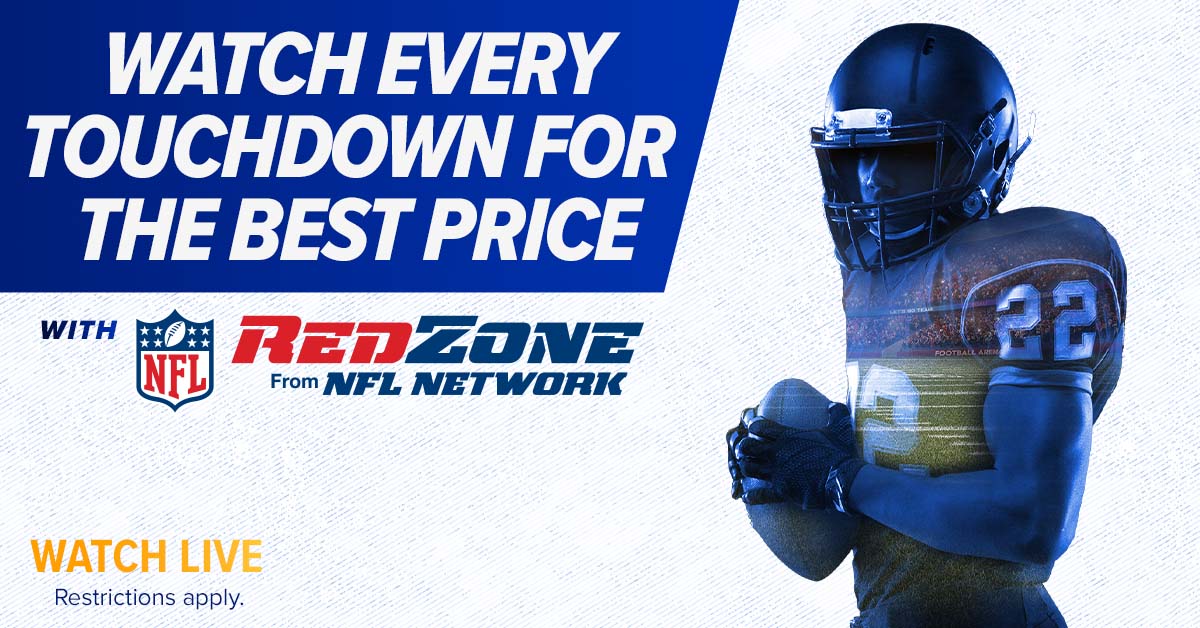 The NFL football season is right around the corner as we are smack dab in the middle of the preseason. That also means that your fantasy football draft is likely days or weeks away, so you’ll have an idea of what players you’re going to root hardest for this season (on top of those on your favorite team). The fall is the best time of year for football fans and there is so much you can watch on Sling TV. NFL RedZone on Sling TV delivers every touchdown from every game on Sundays, meaning you’ll know what’s going on around the league at all times.

The biggest moments and the highlight scores are all in one place on NFL RedZone. Don’t miss a second of it when you have Sling TV. Did we mention Sling offers the best price for all of those touchdowns? You can get the NFL RedZone Sling TV channel for much less than it would cost for a ticket and a hot dog at the actual NFL game. Here’s how.

NFL RedZone brings the best of game action each and every Sunday to your TV set. That’s because the channel is focused on showing you when teams are on offense and on the 20-yard line going in for a score. That produces plenty of thrills each week, as you watch games change right in front of your eyes.

Something that your eyes and your wallet are going to love is the price you can watch NFL RedZone on Sling TV. Watch every touchdown, LIVE, every Sunday afternoon with NFL RedZone on Sling. For a limited time, get Sling Blue for half off your first month and add on NFL RedZone for only $11! That’s so much less than YouTube TV’s current price of $75.98/mo and Hulu Live’s price of $79.98/mo. You’ll save money on all the big moments in games around the league.

There is a live broadcast every Sunday afternoon starting at 1 pm ET and going through the end of the late afternoon window of games. It’s ideal for fans who want to watch all of the action from each game, rather than settle for the one or two games your local cable is currently airing at that time. Plus, you can track your fantasy players while you’re watching.

When watching NFL RedZone on Sling TV, you’ll see who is scoring touchdowns in games around the league. That’s perfect for fantasy football owners that want to monitor how their players are performing in their games. Touchdowns are worth big points in fantasy games (as you’d expect) and being able to see them scored in real-time means you won’t have to refresh your team’s page every 30 seconds.

NFL RedZone also shows you the stats from each game, thanks to NFL Network’s running bottom line on the bottom of the screen. So, even if the player you’re looking for isn’t currently ready to punch one in from the red zone, their stats will be scrolling by to help you keep tabs on how they’re doing. If a team scores a touchdown from outside of the 20-yard line, RedZone shows the highlights frequently throughout the day of all the games. That’s why it makes so much sense to add NFL RedZone to your Sling TV streaming package.

Those who look forward to putting a few wagers on NFL games also will enjoy having NFL RedZone on Sling. They can follow along with the scores of each game and take a look at all the scoring plays that could win them some money. Sports betting has become a larger part of the culture in recent years and the NFL has partnerships in place to accentuate them. Keeping track of all that’s going on around the league in one place is a huge aspect of NFL RedZone.

Remember, you won’t find a better price on any other streaming service to get RedZone. All the scoring drives that result in touchdowns can be watched by you, every Sunday afternoon, live, with NFL RedZone on Sling. Don’t forget that, for a limited time, you can get Sling Blue for half off your first month and add on NFL RedZone to that deal for just $11.

Plus, you can save on NFL preseason packages to enjoy games in full this year. Watching the preseason can give you a heads up on who you may want to draft in your fantasy leagues. So, enjoy NFL RedZone on Sling TV and conquer your fantasy football league.