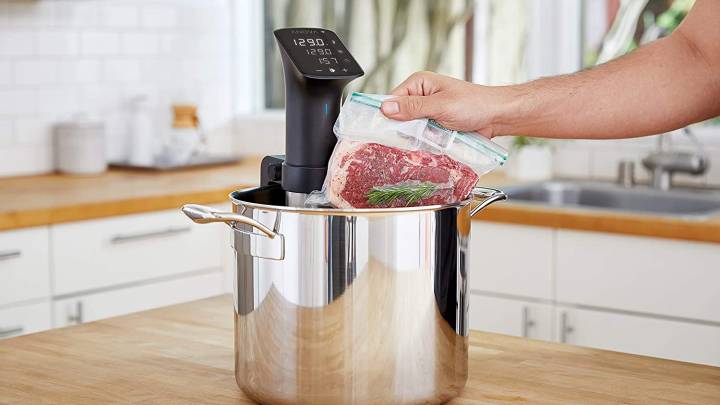 The magic of sous vide cooking was known only to people willing to visit overpriced restaurants owned by famous chefs as recently as just a few short years ago. These days, however, sous vide cooking has grown quite popular in the restaurant industry and in homes across America. Thanks to the advent of affordable sous vide cookers designed for home use, anyone and everyone can cook up delicious sous vide dishes in the comfort of their own homes.

Now, you can save up to $200 on sous vide machines from one of the hottest names in the industry.

Anova was one of the first brands to popularize at-home sous vide cooking machines, and it’s still one of the top companies to this day. The best always comes at a price, however, and Anova’s latest models can cost as much as $400.

The Anova Culinary Sous Vide Precision Cooker Pro is worth every penny at that price, of course, thanks to its fantastic feature set and impressive accuracy. Snag one right now on Amazon, however, and you’ll pay an all-time low price of just $199! That’s a truly incredible deal for the best sous vide cooker that Anova has ever made.

Want to spend even less? You’ll also find a fantastic deal on Amazon for the mid-range Anova Culinary Sous Vide Precision Cooker. This best-seller retails for $200 and that’s how much you’ll pay at most retailers right now, but Amazon has slashed the price to just $139 for a limited time. That’s about what you would expect to pay for an entry-level sous vide cooker from a no-name brand, which is pretty crazy when you consider that Anova is the best in the business.

These deals have been available at Amazon since Black Friday and there’s a good chance they’ll disappear after Christmas. In other words, it’s now or never!