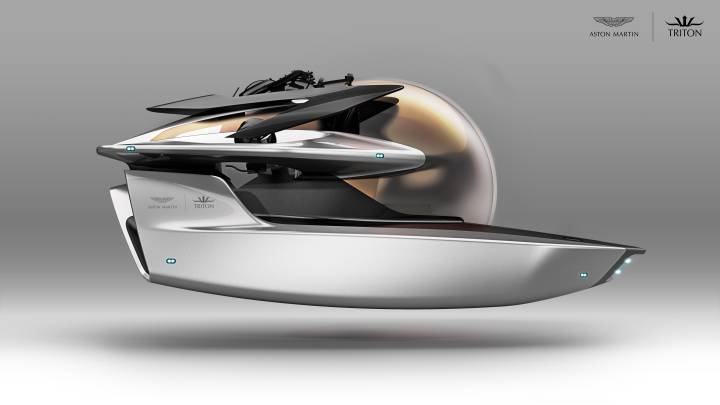 Aston Martin — yes, the century-old auto manufacturer that has long been a favorite of James Bond — has either completely lost its mind or has grown bored building its incredibly powerful, incredibly expensive luxury sports cars, because the company just announced that it’s going to build and sell submarines.

The project, which is being referred to by the codename “Project Neptune,” is a partnership between Aston Martin and luxury personal submersible manufacturer Triton Submarine. At the moment, the project is still in its conceptual stage, but the most current design looks like some kind of amazing cross between a spaceship and a catamaran. That is to say, it looks absolutely awesome.

The information offered in the initial announcement is extremely limited, and largely centers around the partnership between the two luxury companies. What we do know about Project Neptune is that it will be built on Triton’s “Low Profile three-person platform,” carrying a trio of passengers in relative comfort.

Unfortunately, there’s more questions than answers when it comes to the vehicle’s capabilities. Speed, depth, range, and several other specifics haven’t been mentioned. That said, we can use Triton’s other three-person submarines to get a vague idea of what to expect.

The company’s three-person Triton 1650/3 LP has an endurance of 12 hours and a speed of three knots. It’s rated for a maximum depth of around 500 meters and a payload of 1,210 pounds. It wouldn’t make much sense for Aston Martin to partner with Triton on a sub that’s less capable than their current models, so it’s probably safe to assume similar figures for Project Neptune.