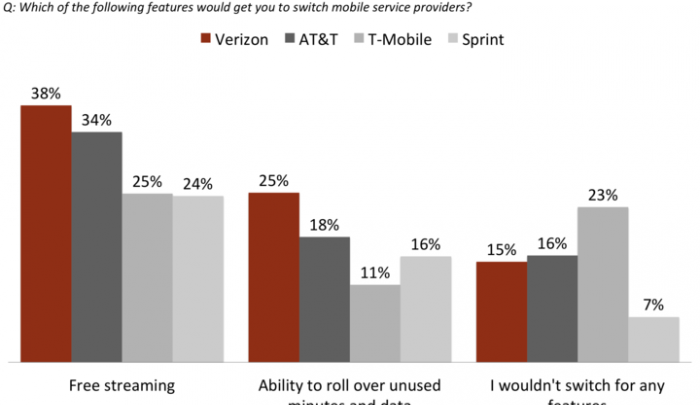 Among the Big Four wireless carriers, T-Mobile is alone in having customers who a vague amount of loyalty. 23% of T-Mobile customers wouldn’t switch for anything, compared to 15% of Verizon customers.

Why are Verizon’s numbers so much worse? BI Intelligence’s Digital Telecom Consumer Survey, the same dataset that compared loyalty between different carriers, has a few relevant answers.

According to the survey, nearly 40% of Verizon customers said they’d switch carriers if it meant being able to stream data without it counting against their data cap. That’s a feature that T-Mobile used to offer via the Binge On program, but it’s actually been usurped in favor of unlimited data plans these days.

Streaming video is a testy subject for Verizon right now. Last month, it made significant changes to all of its plans, including adding a throttle on all video streams, capping smartphone video at 720p and tablet/hotspot video at 1080p. The survey was complete by July 2017, so it won’t have taken Verizon’s recent changes into account.

Verizon is a much larger carrier than T-Mobile in terms of customers, with a wider variety of users on all sorts of different plans. It’s no surprise that its customers will have more complaints than T-Mobile or Sprint, which focus on value-for-money and simplicity rather than complicated rate plans customized for everyone. But Verizon might want to take some notes from the competition: T-Mobile’s paper loyalty numbers show up on the bottom line just as well as they do in a survey.