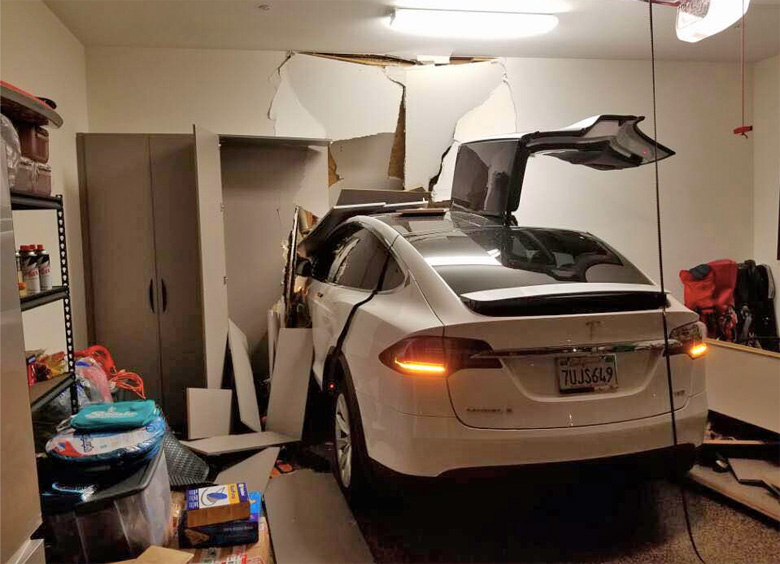 Tesla owners love all of the advanced technology the company has managed to pack into its Model S and Model X electric vehicles. While other companies continue to work on similar systems for their cars, Tesla’s remote update mechanism allows the company to deploy huge feature changes far more quickly than any other automotive company. There are rare occasions when the tech in Tesla’s cars causes problems though, and a well-known celebrity has filed a lawsuit claiming that his Model X suddenly accelerated on its own while he was parking in his garage, crashing into through a wall and into the man’s home.

Meanwhile, Tesla has issued a response that includes some serious allegations of its own.

In a post on Facebook on New Year’s Eve, South Korean actor Ji Chang Son explained an alleged incident that supposedly took place at his home this past September. Much of it is difficult to make out due to the machine translation, but the gist is that the man claims his car spontaneously accelerated while he was parking in his garage. As a result, he says the Model X plowed through the back wall of his garage and into his home. Photos that accompanied Son’s post show a white Model X that has indeed driven through a wall in his garage.

Reuters notes that a lawsuit seeking class action status has been filed by Son against Tesla, stating that the car was at fault for the accident. The lawsuit also says that “within the first year of Model X vehicles being on the road, and with only 16,000 Model X vehicles in use (the vast majority of which have been on the road significantly less than one year), there have been ten (10) reported incidents of sudden unintended acceleration — a staggeringly high rate of SUA incidents of 62 per 100,000 vehicles per year.”

Meanwhile, Tesla said in a statement to Reuters that it has analyzed the Model X’s logs and determined conclusively that the accident was not the result of spontaneous acceleration. “The evidence, including data from the car, conclusively shows that the crash was the result of Mr. Son pressing the accelerator pedal all the way to 100 percent,” a Tesla spokesperson said.

Further complicating matters are allegations from Tesla claiming that before Son filed the lawsuit, he threatened to use his fame to tarnish the company’s reputation if it didn’t pay him and admit that a malfunction in the Model X caused the accident. Specifically, a Tesla spokesperson said in an email to Gizmodo that Son “threatened to use his celebrity status in Korea to hurt Tesla” unless the company “agreed to make a financial payment and acknowledge that the vehicle accelerated on its own.”

Son has not responded publicly to Tesla’s accusation.