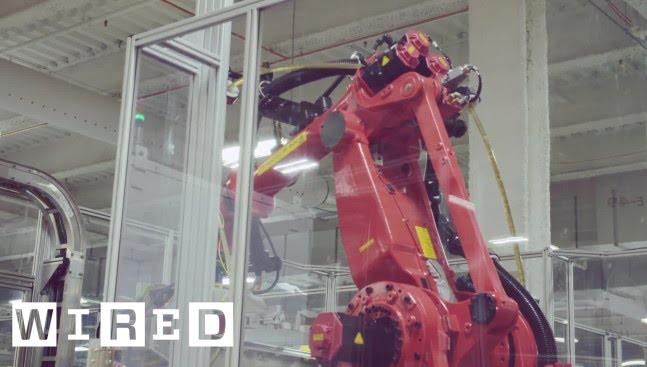 Anything called a “Gigafactory” being built in the Nevada desert was always going to be big. (There’s no other reason to build something in the Nevada desert, for one.) But a new behind-the-scenes video from Wired shows the speed and ambition that Tesla is applying to building the factory where the Model 3 will be made.

The Gigafactory is under construction in Sparks, Nevada. When it’s finished, it will be the biggest building in the world by footprint, and will churn out batteries for 500,000 Model 3s per year. But first, Tesla needs four walls and a roof.

Wired‘s video does a good job of showing off how impatient Tesla is being. The first section of the factory is already up and running, assembling battery cells into battery packs. At the same time, the basic structure of another factory section is being built outside. Other parts of the factory are still just hot sand.

Scaling up production is probably Tesla’s hardest challenge for the next few years, even above expanding its autonomous driving technology or fighting with regulators over car sales. Tesla has already struggled with quality control on the Model X, a car that’s being produced in much lower volume than the Model 3. If quality slips with volume (a fairly usual thing with manufacturing), Tesla will have a real struggle on its hands.

None of this is dampening Musk’s enthusiasm, of course. Tesla’s founder laid out a roadmap for the next few years recently, and it includes starting a ridesharing service, making a Tesla pickup, and building public transportation systems. No resting on laurels, then.