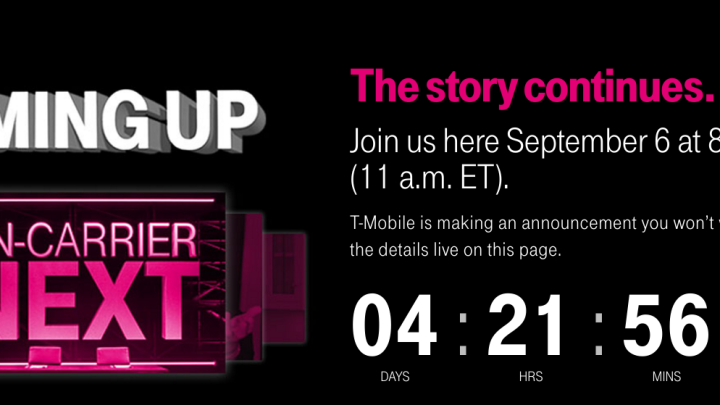 T-Mobile is having a good few months. The company is aggressively expanding its network coverage, winning customer loyalty, and to top it off, its biggest rival just killed the only unlimited data plan that rivaled T-Mobile’s offerings.

So you might think this would be a good opportunity for some laurel-resting. But T-Mobile would seem to disagree.

The network has sent out invites to its next “Un-Carrier” event, happening next Wednesday. The Un-Carrier events tend to be where T-Mobile reveals big changes to its plans, devices, or network. Previous Un-Carrier events have brought us T-Mobile Tuesdays, the One unlimited plan, and a lot of magenta onesies.

Right now, there’s no logical massive change for T-Mobile to make. Its unlimited plan is competitive, and introducing some kind of new plan would go against the ‘simple is better’ logic it’s been promoting for years.

The timing is suspiciously close to Apple’s next iPhone announcement, which means it’s possible it will have something to do with its equipment installment plans, trade-in, or leasing program. Given the iPhone 8’s rumored high price tag of $999, a “creative” pricing strategy to help mask the true cost would make sense.

T-Mobile recently made a few small changes to its Jump-On-Demand leasing program, and I could see it taking that to a logical extreme. If it rolled the lease cost and plan cost into one payment — say, $100 for a One line and a new iPhone — and added incentives to ad multiple lines all with new phones, it could persuade more people than usual to make the switch.

Something that would go hand-in-hand with that would be an upgraded trade-in program. Carrier trade-ins currently suck: provided your phone is in good shape, you can get far more money selling it privately through Craigslist. T-Mobile could make the process better, and provide extra incentive for people to trade in a phone, get cash up front, and move onto a Jump-On-Demand lease program.