Apple’s got a credit card, and now T-Mobile is launching a checking account

Tech companies and telcos, all of a sudden it seems, have decided to start making money by getting into, well, money. The same way Apple just last month announced it’s teaming up with Goldman Sachs to launch a credit card, T-Mobile today unveiled a wider expansion of something it started trialing on a limited basis late last year — The Un-carrier has teamed up with BankMobile, a division of Customers Bank, to start offering a no-fee, mobile-oriented checking account.

Among the key features of the checking account, T-Mobile postpaid customers will be able to earn an annual percentage yield of 4% on balances up to $3,000 when they sign up with their T-Mobile ID and deposit at least $200 each month. Customers also get a 1% APY on every dollar over $3,000.

According to T-Mobile’s announcement today, its thinking here is that most consumers (7 out of 10, according to its data) want to bank mostly or exclusively digitally. While at the same time, only a small fraction of banks have a strong digital strategy in place.

The T-Mobile Money mobile app is available from the Google Play Store for devices running Android 5.1 or later. Likewise, an iOS version is available for Apple devices running iOS 10.3 or later. You can sign up for an account from your smartphone — and even though the major theme of today’s announcement is that this is a mobile-first banking offering, you can also use T-Mobile Money online, at www.t-mobilemoney.com. 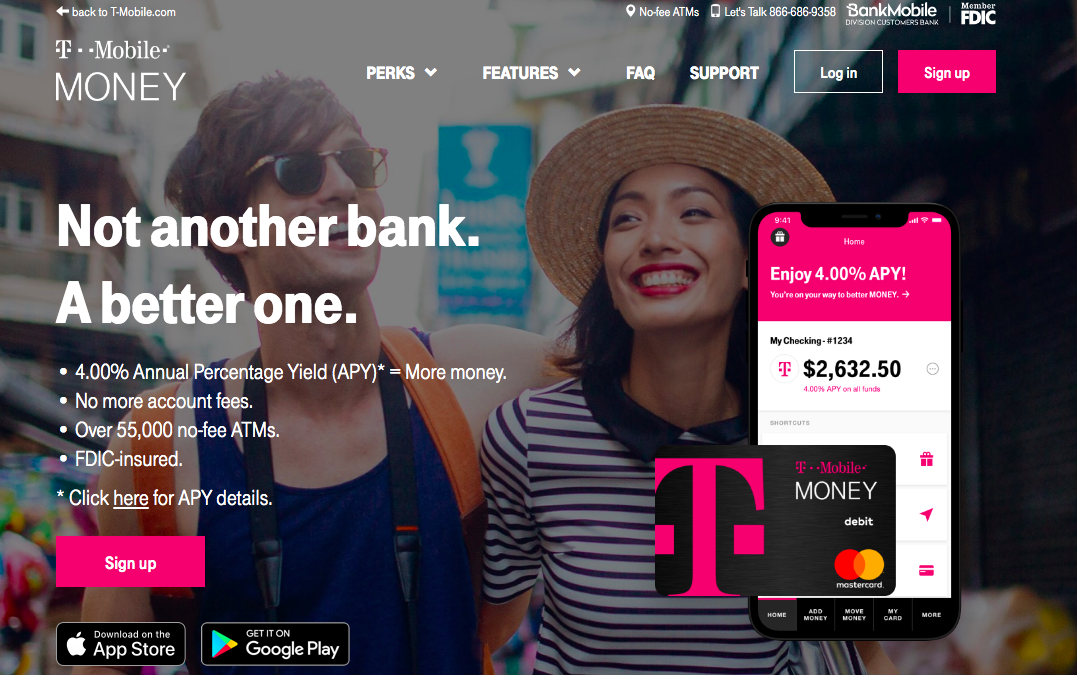 “Traditional banks aren’t mobile-first, and they’re definitely not customer-first,” said T-Mobile CEO John Legere. “As more and more people use their smartphones to manage money, we saw an opportunity to address another customer pain point.”

The checking account comes with a Mastercard debit card you can use at more than 55,000 Allpoint ATMs worldwide. The card also offers Mastercard Zero Liability Protection.

US consumers reportedly paid some $34 billion in overdraft fees alone in 2017, which is why T-Mobile says this checking account will have no monthly, overdraft or transfer fees. T-Mobile postpaid customers can opt-in for “Got Your Back” overdraft protection when they sign up for the checking account, which will let you go into the red up to $50 without penalty. The only requirement is that you bring the account back to a positive balance within 30 days.