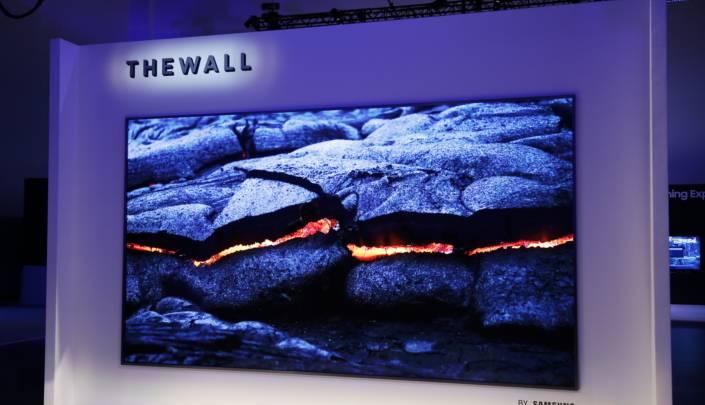 The 146-inch TV Samsung unveiled at CES this year is quite a beast, with MicroLED technology that provides for what the tech giant describes as “the ultimate viewing experience.”

And now comes word that a thinner version for the consumer market is coming next year.

That’s according to the president of Samsung’s visual display business Han Jong-hee, who said during a press conference that the company will start mass production of The Wall later this year and that a slimmer version is coming in 2019. The later will be 30mm thick, compared to the 80mm Wall, Engadget notes, and that while it’s aimed at luxury homes “the price will not be as high as people think,” according to Han.

Pricing, to be sure, hasn’t been revealed yet. An important point to also note about the Wall is that Samsung is trying to shy away from calling it a TV, since, according to Han, “consumers will be able to do anything they want with displays or screens that they feel comfortable with, just like mobile displays.” Samsung went on to explain that its module-based, bezel-less design lets consumers customize it to suit their needs. “The screen can adapt to serve different purposes,” Samsung announced, “such as creating a wall-size display for multiple spaces.”

Everyone will still, you know, call it a TV, but we digress.

In the Wall reveal in January, Samsung also raved that its MicroLED technology eliminates the need for color filters or backlight and that the screen “excels in durability and effectiveness, including luminous efficiency, the light source lifetime and power consumption.”

A report from the Korea Herald newspaper notes that with the Wall, Samsung will especially be targeting places like hotels, shops, stadiums, museums, convention centers and luxury mansions. The consumer version won’t come in fixed sizes or inches like other TVs, per the report. You’ll apparently choose how many display pieces you want and fix it to a wall in any configuration.

Again, from Engadget: “MicroLED TVs, like OLEDs, have pixels that emit their own light, negating the need for a backlight. Both have high 10,000 to 1 contrast ratios and true blacks, while consuming less power than regular LEDs. However, Samsung claims that because MicroLEDs use inorganic materials, they’ll last longer and suffer less from pixel burn-in than organic-based OLEDs.”

While we still need to wait to see how much it’ll set you back, the specs sure make this sound like a gorgeous piece of hardware. More than 300 media representatives and influencers were on hand for Samsung’s unveiling of the Wall in January, a gathering at which the company spelled out a vision of the future that include TVs that offer both jaw-dropping visuals as well as the ability to function as a hub that “integrates seamlessly into people’s lives.