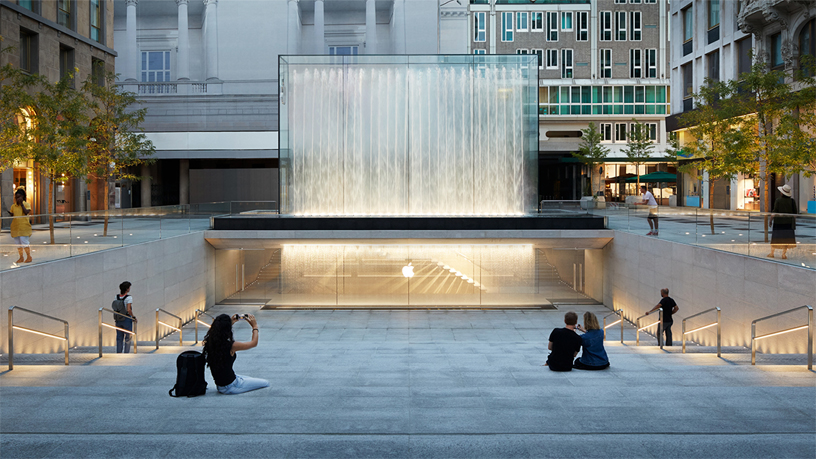 Apple has transformed a piazza at the center of booming Milan for one of its newest and arguably most gorgeous stores, bringing the tech giant’s latest retail design for the first time to Italy.

Set to open Thursday, the store is just off one of the most popular pedestrian streets in the city — the Corso Vittorio Emanuele — and includes a grand public plaza above with the store below.

A large glass fountain will serve as a welcome point and entrance to visitors, as well as doubling as a backdrop for a large outdoor amphitheater. The piazza is adorned with a familiar stone seen throughout Milan — Beola Grigia — as well as 14 Gleditsia Sunburst trees, and it will host special events year-round and stay open to the public 24-7.

Visitors will descend a stone and metal staircase to get to the actual store, which is staffed by 230 employees that include many from other Apple stores around the world.

“To work within one of Italy’s historic piazzas is both a great responsibility and wonderful challenge,” said Jony Ive, Apple’s chief design officer, in a statement about the opening. “We combined two fundamental elements of the Italian piazza — water and stone — adding a glass portal that creates a multi-sensory experience as visitors enter the store through a cascading fountain that seems to envelop them.”

Apple Piazza Liberty opens July 26 at 5 p.m. It’s already planning to host, according to Apple, free sessions on photography, filmmaking, music creation, coding, design and more. This September, the store will also host a month-long Milan Series, with 21 local artists who will share their visions for the creative future of the city.

Apple senior vice president of retail Angela Ahrendts has described the store as a perfect expression of the company’s vision for its stores as “modern-day gathering places.”

In other unrelated Apple store news:

Appleinsider has a roundup of other retail tidbits on the company, which includes store openings and remodels for the rest of this year. Among the highlights is Apple essentially confirming, via city work permits, that it will restore and convert that famous but long abandoned Tower Theatre in downtown Los Angeles. “The structure was originally built in 1927 and was the first L.A. theater to be wired for sound but is now known only as a landmark thanks to its period architectural details. Apple is set to replace the gallery mezzanine, as well as retrofit the building to better withstand earthquakes. It’s unknown when Apple might be ready to open a store.”

There’s also word that Apple may open its first store in Israel soon, in Tel Aviv’s Azrieli Sarona Tower. Talks toward a store there have reportedly been under way “for several months.”