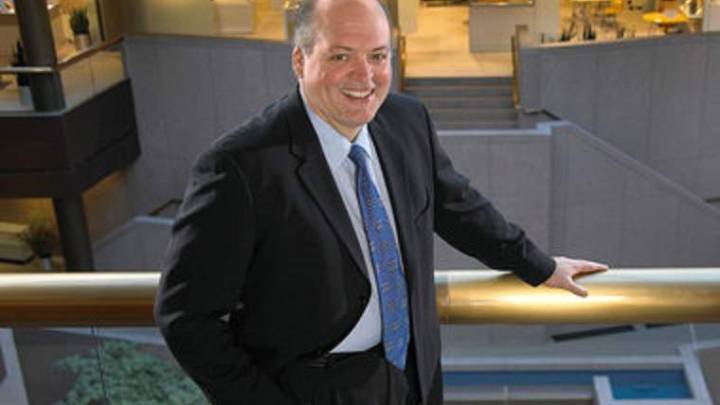 In a major shakeup today, Ford has ousted longtime CEO Mark Fields and replaced him with Jim Hackett, the former executive in charge of Ford’s self-driving car program and a widely acknowledged “transformational business leader.”

Hackett’s experience will be a huge change from Fields, who was the definition of a company man. Fields was recruited by Ford in 1989 and worked his way up through the business, starting with regional positions and moving up to the Chief Operating Officer by 2012. He was appointed CEO in 2014, but since then Ford’s share price has plummeted by 40%.

Ford’s board of directors is clearly moving in a different direction with the new CEO. Rather than putting its faith in someone who knows the car industry inside out, it’s chosen a man with proven success steering an established company through a major change. Hackett was the CEO of Steelcase, a big player in office furniture, for two decades. During that time, offices moved away from closed offices and cubicles into a more open plan, which necessitated a major change in furniture. Steelcase handily weathered the storm and is now sitting pretty on top of the office furniture industry.

Ford is hoping that Hackett can do the same things with the car industry and automation. Ford has not been as quick as competitors like General Motors or Tesla to embrace self-driving cars, but what work it has done has been led by Hackett. He’s served as the chairman of Ford Smart Mobility, Ford’s autonomous driving and new technology subsidiary, since its founding last year.

“I am absolutely thrilled to lead Ford’s mobility business into the future,” Hackett said at the time. “Transportation in the world today is on the cusp of a major revolution, and Ford plans to lead the way.”

Ford and Hackett’s focus on the future of transportation has been much wider than just working on a self-driving car for the consumer market. In the last year, Ford has experimented with pilot programs for predictive parking, ridesharing, and a predictive shuttle service. Hackett also worked with IBM on new data analytics programs to help understand mobility and transportation, rather than just the mechanics of self-driving cars.

Ford’s play here seems to be more nuanced than just building a self-driving rival to the Tesla Model 3. Hackett wasn’t just promoted so that he could chase other car companies to drive hands-free from NYC to LA. Instead, he’s putting his focus on what comes next. Self-driving cars are going to change the world — that’s not up for dispute. What Jim Hackett and Ford’s board is hoping is that Ford can predict exactly what that world is going to look like.