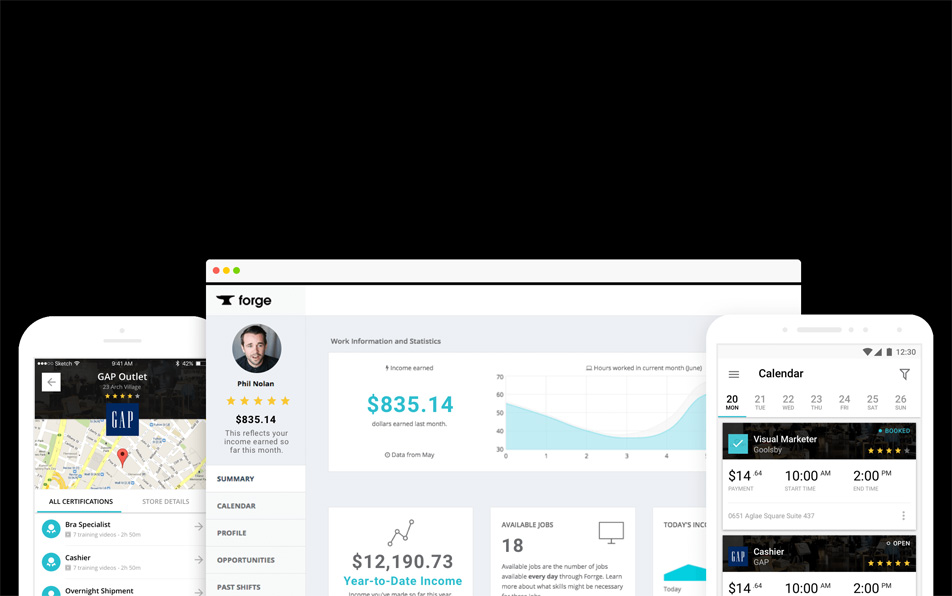 When 24-year-old author and entrepreneur Stacey Ferreira dropped out of NYU last year to participate in the Thiel Fellowship, the grant program launched by PayPal cofounder Peter Thiel, friends were puzzled by the move.

For some, she recalls, the response was “you’re crazy!” Others were not only more understanding — she even roped a few of them into joining her newest project, the San Francisco-based startup Forge that she launched after joining the fellowship.

Along with her brother Scott and friends Lloyd Jones as well as actress Talulah Riley — who earlier this year filed for divorce from Elon Musk — the venture they launched is built around an app focused on hourly workers in retail and quick-service restaurants. The app lets them pick the shifts they want and set their own schedules, and the operation behind it announced earlier this year it raised a $1.5 million seed round from backers that include Social Capital and Uber investor Sherpa Ventures.

Brands the company works with include national names like Dunkin’ Donuts and Little Caesars’, among others.

Riley told BGR she and Ferreira met at a GirlGeek panel years ago. “I’m always looking for brilliant ideas, opportunities, but it’s actually extremely rare that a fantastic idea is coupled with such a strong team,” she said. “Stacey had both experience and all the characteristics of a true entrepreneur.”

So who is Ferreira and how does her company’s app work? Her professional experience has already included projects like co-founding the cloud-based password manager MySocialCloud, which got bought out by Reputation dot com. She also published a book last year, “2 Billion Under 20: How Millennials are Breaking Down Age Barriers and Changing the World.”

As for Forge, the way it works:

Companies load existing part-time employees onto the platform. They can also post new job openings, receive applications as well as approving and denying those applications. Companies can also, among other things, schedule time on the Forge calendar for interviews with prospective employees and rate team members after each shift to build an up-to-date work history.

“When my book came out, I went on a book tour and started speaking to a lot of college kids and high school kids and shared the stories of kids in the book,” Ferreira said. “And everyone I was talking to was like, this is amazing. I want to be my own boss. I want to feel like I’m an entrepreneur. I became really interested in that shift in attitude and what that means for the macro economy.”

Around the same time she was considering all of this, two of her best friends graduated from Arizona State University.

“They started working in retail,” said Ferreira, who also grew up in Arizona. “They started working hourly jobs. I talked to them about their day and kept hearing about how they have this issue with scheduling. One of my friends who works at a retail outlet was like, yeah, my manager hands me a schedule once a week, and if I can’t work that schedule I have to call and text a million other people to see who can come take my shift.

“The more I kept hearing this from her, I started talking to a bunch of other people and realized it’s not just one thing. Fifty-eight percent of the American population works an hourly job. So we wanted to help give employees flexibility to work their own hours but still work at these traditional companies.”

The name Forge was a natural choice because of the connotation to artisans, to entrepreneurs, to the idea of people crafting their own destiny that the team wants to convey. Its competitive differentiation? Ferreira points to what she says is a lack of talent and transparency around the hourly job market.

Use Forge, for example, and among other benefits workers can know where they stand after every shift, getting a grade of sorts, so that issues aren’t allowed to fester.

“As (Ferreira) started describing some of her ideas around the future of work, I knew that Forge was a noble cause — helping individuals make a living wage through having flexibility over their work schedules,” Riley said. “It was something I started researching more and realized there’s a massive opportunity to use software to make life better for millions of people in America alone.

“It would be amazing to live in a world where hourly workers feel satisfied with their work-life balance and empowered in their positions, where employees have the freedom to work as much or as little as they like on a schedule of their own choosing. That’s the world Forge is building.”

It’s not necessarily the sexiest-sounding application, but Ferreira likewise points to higher minded ambitions: “I don’t want my friends to ever miss their kids’ baseball game bc they have to work a shift. I want them to be there for things that matter, because life is short and people should be able to have that flexibility.”