The best data we have suggests that cord-cutting — ditching cable TV for streaming services — is happening faster than anyone foresaw. But in case you were uncertain about cable TV’s future demise, more research is here from the Pew Research Center to really stick the knife in.

A new survey suggests that young American adults, aged 18-29, are disproportionally using streaming services rather than cable TV to watch programs. Even if older generations are keeping cable TV alive for now, the writing’s on the wall.

According to Pew’s survey, 61% of those in the 18-to-29 age bracket say the primary way they watch TV is on streaming services. That number is just 31% for cable. Using an analog antenna isn’t in fashion among the youths, as just 5% of people surveyed used a digital antenna as their primary way of getting TV. 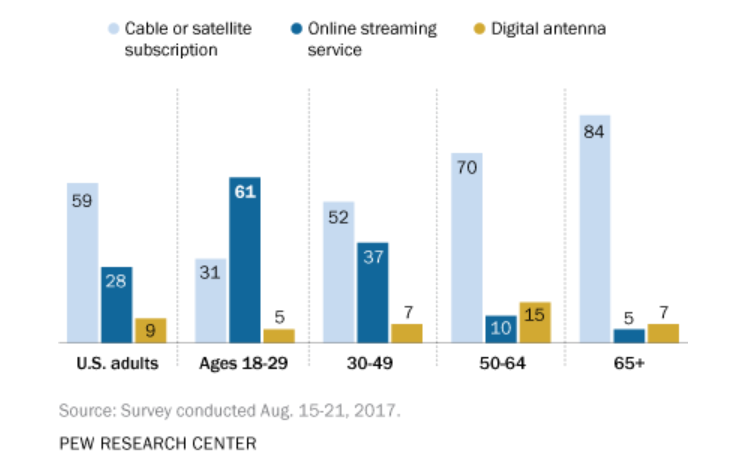 Those numbers are bad on their own, but you need to consider them in context to understand the problem facing cable TV providers. Cable was the most popular way to watch TV among every other age group: 52% of those 30-49 use cable the most, 70% of 50-64s, and a truly impressive 84% for those over 65.

That should prove to cable companies that streaming services aren’t going to be some kind of side distraction to regular cable bundles. As young Americans grow up, they’re going to take their viewing habits with them, and cable subscriptions will start falling off a cliff — far faster than they are right now. It won’t be a matter of people cancelling cable subscriptions and replacing with something new; people moving into their first home won’t get cable to begin with.