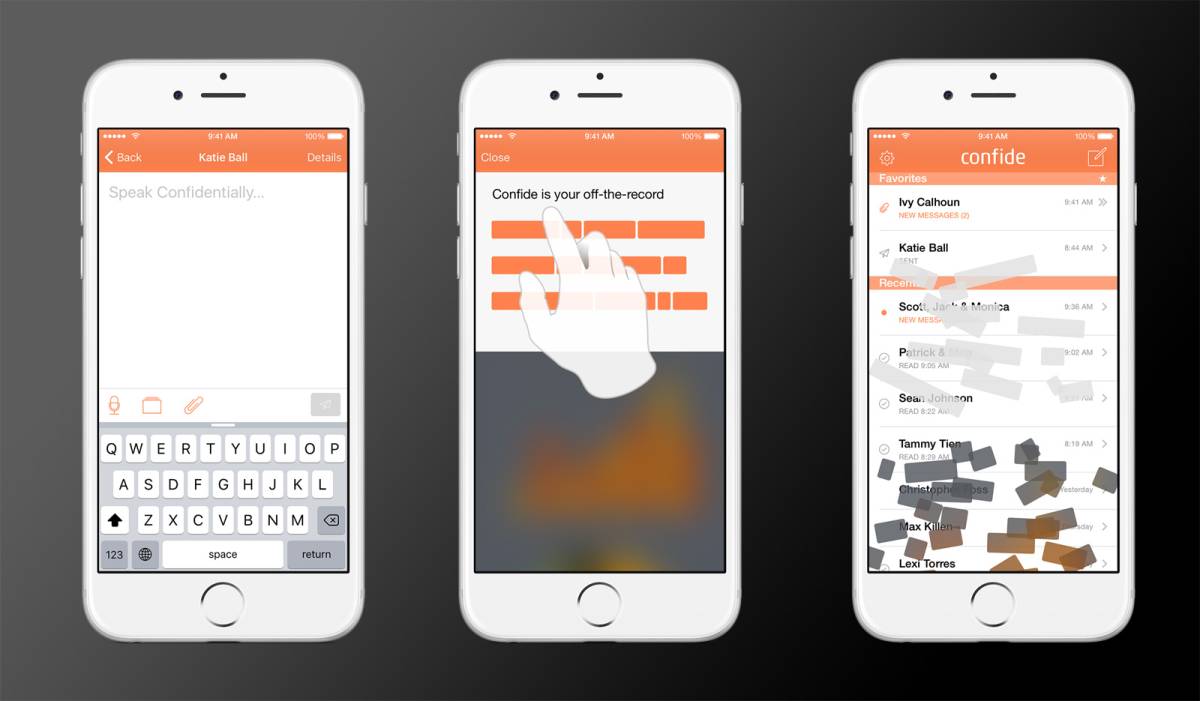 It started with an email, which led to a swapping of voicemails, which led to several days of back and forth until the two professionals trying to connect with each other finally decided — this is taking too long; it shouldn’t have to be this hard to communicate.

So they did what any technology-minded executive with means would do in that scenario. They launched an app. It was back in 2013, and the result was Confide, a secret messaging app — Snapchat for professionals, as they like to call it — whose chats self-destruct after they’ve been read.

Four years on, the service has raised $3.4 million, is available in 15 different languages and works across major platforms from iOS to Android to PCs. Its profile has also skyrocketed in recent weeks — not due, really, to efforts from the company, which doesn’t have much in the way of an advertising or marketing push to speak of.

No, Confide is in the counterintuitive position of being a secret messaging service dealing with a gush of notoriety because — well, ok, like so much of the news these days, there’s a Trump connection in there somewhere.

Anyone who’s gotten whatever the news audience equivalent is of whiplash from trying to keep up with the head-spinning pace of news out of the Trump administration will already be clued in to this: not all of the press, shall we say, has painted the newest occupant of the White House in the most flattering of lights. And some of that coverage has been stoked by leaks from within the mighty bowels of the country’s great ship of state.

Trump tweeted on Feb. 16 that the hunt was on for “low-life leakers!” That’s helped spawn a culture of secrecy throughout the administration, as staffers have reportedly begun taking steps to cover their tracks and communicate using Confide.

Talk about an unexpected journey. Confide co-founder Jon Brod says they set out to help business people communicate securely. Now worried staffers are using it to keep themselves away from the scrutiny of the leader of the free world.

From the beginning, Brod tells BGR, “what we realized was the permanent digital record of the Internet is truly an impediment to efficiency and is dangerous as it relates to sensitive communication.

“And so we said — Snapchat was gaining some popularity at that point and was getting people comfortable with the notion of ephemerality. And we sort of said, huh, what if we could apply some of those principles of security and ephemerality to communications particularly among professionals and business people. Wouldn’t that solve some interesting problems and create a private and efficient way to communicate.”

The app he went on to co-found has tended to see spikes in use around big hacks and other security-related events like the Sony Pictures breach in 2014. Confide keeps user numbers close to the vest, but lately Brod says every month has been producing new record highs for the service — and while the U.S. is its biggest market, usage overseas also represents a significant chunk of the business.

Usage of Confide among GOP operatives and staffers to send messages securely — which was reported by the digital political news outlet Axios — has brought the service new recognition. That recognition will help with the go-forward game plan, which includes bringing Confide to additional platforms along with an even higher-level goal.

Brod wants to see the brand reach the ubiquity of something like “follow us on Twitter” or “Like us on Facebook.” Maybe one day, he hopes, people will say with the same familiarity, “send with Confide.” Again, with a focus on business profiles — we are to Snapchat, Brod says, what LinkedIn is to Facebook.

Among other quick facts about Confide:

“If you think about conversations throughout history, they were the spoken word, whether through a face-to-face meeting or a phone call,” Brod says. “And in those conversations, you generally know who you’re speaking to, and only the intended recipient can hear those conversations. And then after the words are spoken, they disappear.

“With the advent of digital communication, all of that got turned on its head. And now everything you communicate digitally is archived forever in the Internet’s permanent record. While that’s really good for innocuous conversations, because it allows you to communicate on any device, in real time, it’s exactly those characteristics and those copies that make it vulnerable and dangerous for sensitive communication. So that’s how we think about the business.”

And about what’s next for getting users to confide in, well, Confide.

Tweet
Amazon slashes free shipping threshold back down to $35